The owner of Crow Bar, a new bar on Franklin Avenue in Crown Heights, refuses to bow to criticism that his latest venture broadcasts a racial slur above its entrance. Crown Heights was known as Crow Hill in the 19th century, and while historians debate the origin of this moniker, at that time the word "crow" was used as derogatory term.

"I mean, in a black neighborhood, of all the names there is, that's the name you would choose?" said 62-year-old Renold Griffith, who was standing outside of the bar on the corner of Union Street on Tuesday night. "I mean come on. I'm not against the bar, but that name brings back a lot of memories."

"Why would you name it that if you want to attract your clientele from this area?" said Esteban Giron of the Crown Heights Tenant Union, which represents tenants who live above the bar. "You either didn't want to or you just don't care." His group has been vocal in opposing Crow Bar since last winter, when Giron voiced concerns to the owner at a Community Board meeting.

Crown Heights is predominantly black, though its demographics have shifted in recent years.

Dan Wilby, who owns Crow Bar and the Hollow Nickel in Boerum Hill, does not live in Crown Heights, and he said he didn't know much about the neighborhood before he started planning for the bar. When opening a new business, "I try to find out all the history inside a neighborhood to see if there's something kind of interesting to pull out and pay homage to," he told Gothamist this week. "Honestly Crown Heights doesn't have a lot of real rich history to it that I could find recorded," he added. What he did find were references to Crow Hill.

Crown Heights was known as Crow Hill for the better part of the 19th century, up until Crown Street was built in 1916. From 1848 to 1907, the Kings County Penitentiary—a prison for minor offenders known also as the Crow Hill Penitentiary—stood on Carroll Street between Nostrand and Rogers avenues.

Wilby adheres to a benign interpretation of the Crow Hill name. "The penitentiary was called Crow Hill after the crows that sat on top of the hill," he said.

Zaheer Ali, an oral historian at the Brooklyn Historical Society, said Wilby's claim is a minority opinion. "Most historians suggest that the name originated as a derogatory term in reference to the earliest black residents of the settlement, which would become Crown Heights," Ali said.

Wilby bristled when asked to comment on this interpretation. "If people are offended I'm sorry," he said. "It's not the intention of it, but it's a free world I guess."

"Even still, what would my intention be?" he added. "To keep the people out who are here right now?" Wilby, who's white, gestured around the room, where numerous black patrons sat at high tables and low booths. "Like, really? So I don't know what to say."

The Brooklyn Daily Eagle made frequent reference to Crow Hill in the late 19th and early 20th centuries, and accounts of the name's origins vary. In one article from August of 1873, the reporter interviews a retired police officer. "How did the settlement get to be named Crow Hill?" he asks. To which the officer responds:

Well, they [the residents] had to live away from the white people, and they got up there in these woods. The woods were at that time full of crows, and it was called Crow Hill, partly because there were a great many crows there and partly on account of the people nicknaming the darkies 'crows' too.

"The Eagle itself had an obvious racial bias," said Ivy Gocker, manager of special collections at the Brooklyn Public Library. "Although if you're looking at Eagle articles it does seem that the name definitely had racial connotations for people using it in the late 19th century."

Crow Bar isn't the first local business to reference the Crow Hill legacy. Bar Corvo, an Italian Restaurant on Washington Avenue, uses the Italian for "crow." (The restaurant did not respond to requests for comment, though a New York Times review from 2012 calls the name "a salute to Crow Hill, as the northern end of Crown Heights was historically known.") Crow Hill CrossFit opened on Park Place in 2013, and moved to Dean Street in 2014. A manager told us this week that he understood the name to be a tribute to the neighborhood. "This could be good press," he said, agreeing to pass on our request for comment. "But it could also be a controversial subject. They might not want to get involved."

Evangeline Porter, 83, founded the Crow Hill Community Association in the late 1980s. For her, the name isn't loaded—it's simply a nod to the history of the neighborhood she grew up in. "We went to the library to find out what that area was called originally," she said. "It was called Crow Hill, and that's how the group got its name."

Many patrons at Crow Bar this week said they weren't aware of the controversy. "I just read about it online and decided to come here," said a white man in his 30s who declined to provide his name. "Since it was across the street from a hardware store, I thought it was a pun."

A black woman from Fort Greene who also declined to provide her name was similarly unaware. "I had no clue it meant all that," she said. "I knew that Crow Hill used to be the name of this neighborhood, but I did not know that Crow was a derogatory term."

"There could be a benign origin," said Amaka Okechukwu, an oral historian and archivist at the Weeksville Heritage Center. One of America's first free black communities, Weeksville neighbored Crow Hill. "But I think the fact that there are so many racial connotations associated with the name is significant. It speaks to the persistence of racism, and how people perceive the value of communities."

On Tuesday, Sean (he declined to give his last name), a 31-year-old black resident of Crown Heights, stood outside Crow Bar smoking a cigarette. 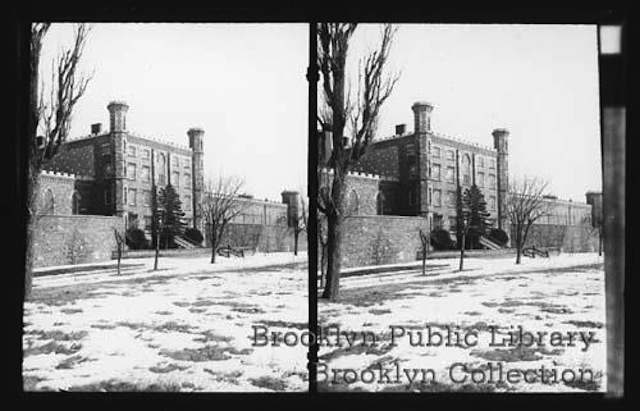 The northern stretch of Franklin Avenue in Crown Heights has become increasingly crowded with bars, boutiques and new residential towers in recent years. The southern section, where Crow Bar opened on Monday, less-so. But Crow Bar joined a small cluster, the third bar to open around the intersection of Franklin and Union since January 2012, following Butter and Scotch and Union Street Pub. "The amount of pressure it's put on the buildings on our blocks is insane," Giron, of the tenants' union, said this week.

Last month, the tenants' union gathered outside Crow Bar to discuss the plight of the tenants who live above it. "This is a 35-unit building," said a 25-year tenant who gave her name as Marcia M. "There are about five units with long-standing tenants, and these new tenants are paying up to $4,000 for an apartment."

"It isn't about my bar. It's about the tenant association," Wilby, who resides in Murray Hill, surmised this week. The tenants' union, he believes, is one small cell of opposition."They want to keep their rent stabilized apartments."

"This is just one more chapter in the ongoing challenges in a neighborhood undergoing rapid change," said Ali, the BHS historian. "I'm just saying, whatever you choose to do, acknowledge the baggage you are carrying."

#Crow Bar
#Crow Hill
#Crown Heights
#original
Do you know the scoop? Comment below or Send us a Tip