Five months after dismissing criticism that his latest venture broadcast a racial slur above its entrance, the owner of a controversial bar in Crown Heights has changed tack. What debuted last September as Crow Bar has been rebranded as Franklin 820, according to a neighbor who saw workers erecting the new sign on Monday afternoon.

Crown Heights was known as Crow Hill in the 19th century, and while historians debate the origin of this moniker, at that time the word "crow" was used as a derogatory term for black people. Franklin 820, meanwhile, appears to be a reference to the bar's address: 820 Franklin Avenue.

Crow Bar owner Dan Wilby did not immediately respond to multiple requests for comment, and we have yet to confirm that Franklin 820 is under his ownership. [Update below: Wilby has confirmed that he still holds the lease, and has changed the bar's name.] The liquor license for the property is still affiliated with Crow Bar, according to the State Liquor Authority website. We called the number associated with 820 Franklin, and reached the voicemail for Crow Bar; Aviva Gibbs, the Crow Bar chef, is also listed as the chef for 820 Franklin on the establishment's Facebook page.

Gothamist spoke with Wilby last fall, about his decision to stand by the name Crow Bar. "If people are offended I'm sorry," he said at the time. "It's not the intention of it, but it's a free world I guess."

Jim Search, a 29-year-old teacher and Crown Heights resident of ten years, captured video of the new sign installation in progress, around 4:00 p.m. on Monday:

Crown Heights was known as Crow Hill for the better part of the 19th century, up until Crown Street was built in 1916. From 1848 to 1907, the Kings County Penitentiary—a prison for minor offenders known also as the Crow Hill Penitentiary—stood on Carroll Street between Nostrand and Rogers avenues.

The Brooklyn Daily Eagle also made frequent reference to Crow Hill in the late 19th and early 20th centuries. In one article from August 1873, a retired police officer told a reporter, "It was called Crow Hill, partly because there were a great many crows there and partly on account of the people nicknaming the darkies 'crows' too."

Wilby adhered to a benign interpretation of the Crow Hill name. "The penitentiary was called Crow Hill after the crows that sat on top of the hill," he said.

Zaheer Ali, an oral historian at the Brooklyn Historical Society, said Wilby's claim was a minority opinion. "Most historians suggest that the name originated as a derogatory term in reference to the earliest black residents of the settlement, which would become Crown Heights," Ali said.

Crown Heights is predominantly black, though its demographics have shifted in recent years. 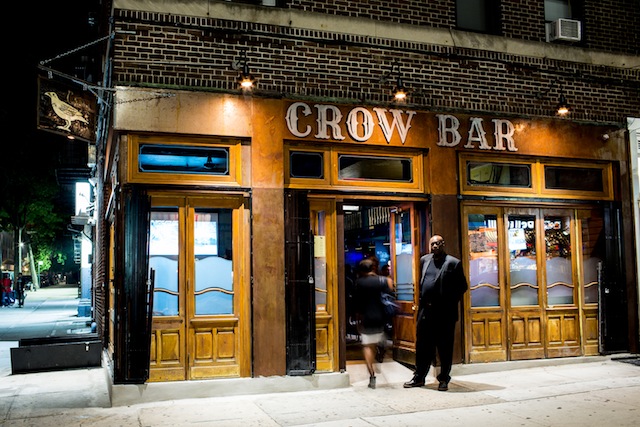 Esteban Giron is an organizer with the Crown Heights Tenant Union, which represents tenants who live above the bar. His group has been vocal in opposing Crow Bar since last winter, when Giron voiced concerns to Wilby at a Community Board meeting. When Wilby doubled down on the name last fall, CHTU hosted protests outside the bar for several weeks straight.

"We would oppose the bar no matter what," Giron told Gothamist on Tuesday. He and other advocates have called for fewer bars and more affordable amenities as the cafes and boutiques north of Eastern Parkway have begun to spread south.

"But this is definitely a win," he added. "It really hurts to have to walk by something every day that's painful to you."

Search, the teacher who captured video of the new sign going up, says that he's boycotted the bar since the day it opened. "If he [Wilby] really cared he would have done it [changed the name] from the beginning," Search reasoned.

"I'm still not going to go there, just because he changed the name," he added. "Come on now."

[Update 1:30 p.m.]: In a statement to Gothamist, Wilby said that he changed the bar's name, and that "it was a significant and regrettable oversight on my part not to have done my due diligence in learning the negative aspect of the neighborhood’s history."

"I remain committed to Crown Heights and Franklin Avenue and to offering a welcoming atmosphere with affordable food and drink in the newly reopened 820 Franklin," he added.

#Crow Bar
#Crown Heights
#racist
#original
Do you know the scoop? Comment below or Send us a Tip