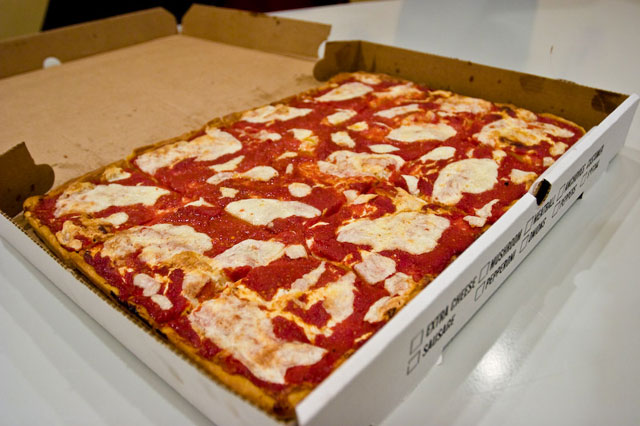 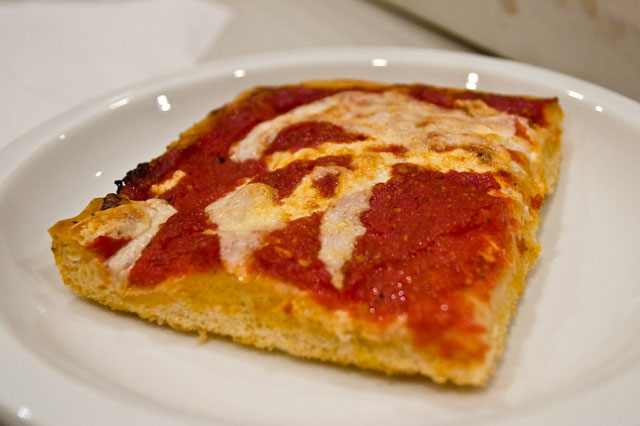 Photo of pizza by Tien Mao

Just last week, the Crosby Connection opened in its new location, continuing its tradition of serving delicious, reasonably priced sandwiches. If you were fortunate to get to Crosby early enough last week, owner Joey Cramarossa was giving away samples of a pizza that he planned on selling from his new location. When we previously talked to Cramarossa, he said that there was nothing like this pizza in the area, something that is painfully obvious to us everyday.

Yesterday, Gothamist was able to order the pizza, which is something that Parisi Bakery has apparently been selling for a few years. It is unclear whether it's available by the slice yet or with toppings, but if you call, you can order it by the pie. Cramarossa likened the square slices to the ones L&B Spumoni Gardens specializes in.

Adam Kuban describes the pizza over at L&B thusly:

Crisp on the bottom, airy yet toothy in the middle, and topped with a blanket of whole-cream mozzarella and then a tangy sauce, they are superior to the dense, tough Sicilian slices you get in most pizzerias, where the squares are often an afterthought, on the menu as a matter of course.

After tasting the Crosby/Parisi pizza, we can certainly see the similarities. The Crosby/Parisi slice has a layer of sweet (but not overly so) sauce with a light amount of cheese on top and a crust which crisp on the bottom. The pie costs $17 (12 slices) and individual slices will run $2.