Crosby Connection's 45-Square-Foot Lease is Up 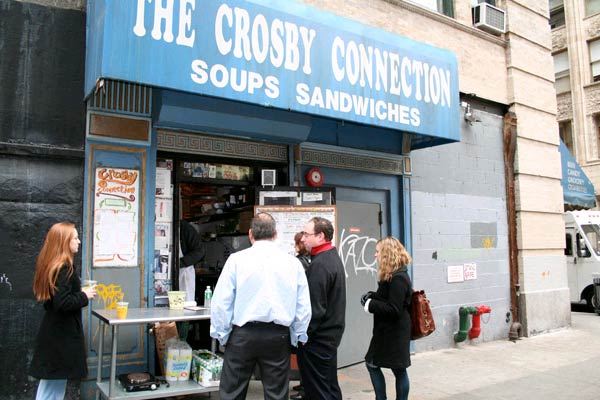 On Crosby Street between Bleecker and Houston, there's a literally hole-in-the-wall sandwich shop called The Crosby Connection. Joey Cramarossa, an ex-cop from New Jersey, works out a tiny space to serve up unbelievably fresh, delicious, filling and reasonably priced sandwiches and salads at $5-6 each.

The meatball hero (with ricotta cheese) is hot and just what you want on a cold winter day, while the avocado, brie and fresh dill sandwich is decadently rich when served on soft foccacia (the breads are from Parisi!). On a fine day, the line can be over 8 people long waiting for an Italian Stallion - cappicola, provolone, salami, fresh tomatoes, sweet roasted peppers, romaine lettuce, basil, virgin olive oil, balsamic vinegar.

Lately Cramarosa has been gearing up to move his operations because his lease is up. Billy Chasen, a fan of the Suzy Special, gives some back story about why it's so special:

Joey has done hundreds of mitzvahs throughout his reign as sandwich king. He lets people pay later and says you’re “never short” when buying a sandwich. He’s also consistently fed the homeless and 5 years ago, while walking to work saw a kid lying in a refrigerator box with a dog. Joey took the kid (Johnny) under his wing, gave him a job, and he’s worked at Crosby ever since.

Billy adds the building manager is the one trying to keep the sandwich joint out and "Joey believes that if the actual owner of the building, a Mr. Heller of Heller Realty was actually informed of the situation he wouldn’t be forced to shut it down."

So, here's how Billy suggests people get involved: