Last night we were alerted to the above photo, taken at Smorgasburg in Williamsburg last weekend and posted on Twitter with the description: "Guy is literally trying to sell a Cronut in the Ramen Burger line." When we regained consciousness on the floor after fainting from a dizzying head rush of foodiot synergy, we swung into action to find out just how literally we should take that particular literally.

The answer? Semi-literally. Turns out the alleged Smorgasburg cronut scalper wasn't trying to unload his precious pastry for anything as vulgar as money, but something much more valuable: a better spot on the line for the illustrious Ramen Burger. Hagan Blount, the cronut-pusher in the photo, tells us, "I had friends coming and I wasn't sure they were going to get burgers."

Sadly, Blount's slacker friends didn't have what it takes to obtain their own Ramen Burgers, unlike Blount, who is clearly a professional. Not only did he rise early enough on a Saturday to score the elusive cronuts, he then raced over to another long line in Williamsburg for the second station of the cross to snag one of the limited-edition burgers. All he needed was a trip to the line outside Rockaway Taco for the trifecta. 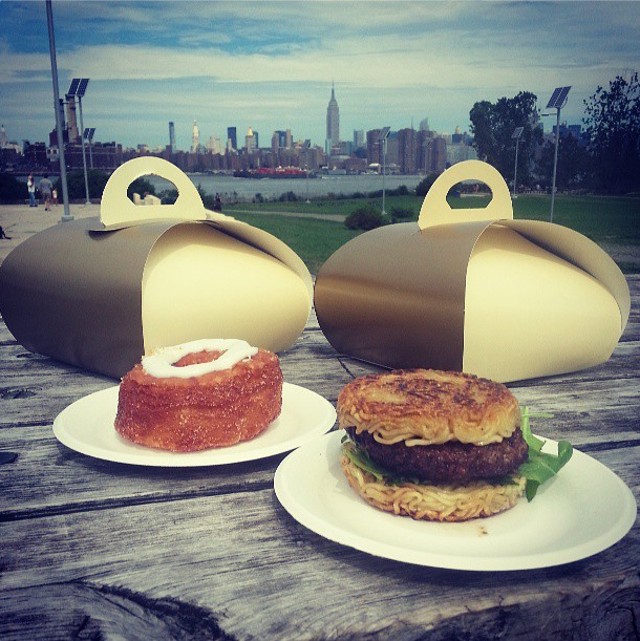 And when no one on the Ramen Burger line was willing to let him cut ahead for a cronut, Blount says he traded the pastry for three Cantaloupe Juices from the stand next to the Ramen Burgers. Given the cronut's high street value, that didn't seem like such a good deal for him, and we asked Blount how much the Canteloupe Juice cost.

"I don't remember," Blount told us. "At Smorgasburg that morning, the Cronut was worth somewhere between an early spot in the Ramen Burger Line and three juices." Clearly, the exchange rate for our cronut-based economy is still fluctuating too wildly for New York City's long-term stability. Scott Stringer for Cronutroller!

#cronuts
#foodiots
#smorgasburg
#original
Do you know the scoop? Comment below or Send us a Tip