Cronut Craze Hits Peak: The Scalping, The Trademark, The Lines

The Cronut was only born a few weeks ago, but it's growing up so fast. Dominique Ansel created the half doughnut-half croissant in his pastry laboratory, and sells them for $5 each at his SoHo bakery (not a bad deal considering how labor intensive it is to make these). The city has gone so mental for the treat, that Ansel has put a limit on how many one person can buy (6), and has even trademarked the name.... you can't even say "Cronut-inspired." It's smart, but a bit ridiculous... especially considering there have been croissant-doughnut hybrids out there for decades.

And now, your cronut update:

THE NEW CRONUT FLAVOR
It's.... lemon! The new cronut will be "very light," and rolled in coarse maple sugar with a lemon glaze. It debuts this weekend, on Saturday. (The original will still be available, which features a rose glaze and sugar, and Tahitian vanilla cream filling.)

THE LINE
The line has been starting around 6 a.m. now, and the bakery doesn't even open until 8 a.m. But after the doors swing open, word on the street is that things move fairly fast. And there's no special treatment, even Hugh Jackman was spotted waiting on line.

THE DOSSANTS
Meanwhile, the craze has hit Australia, but since Ansel has now trademarked the name Cronut, they're calling them Dossants there.

THE CRONUT BLACK MARKET
Now things get real ugly. People are offering cronut pick-up and delivery services on Craigslist (while others are even selling them right outside the bakery for people who don't want to wait on line—sometimes for as much as $30 each). One Craigslist poster says they'll deliver a minimum of 3 and maximum of 5 cronuts to your door in Manhattan for $20 per Cronut, in Queens for $40 per Cronut, and in Brooklyn for $30 a cronut. That is $200 for 5 cronuts if you live in Queens. This person should be arrested and sent to cronut jail. 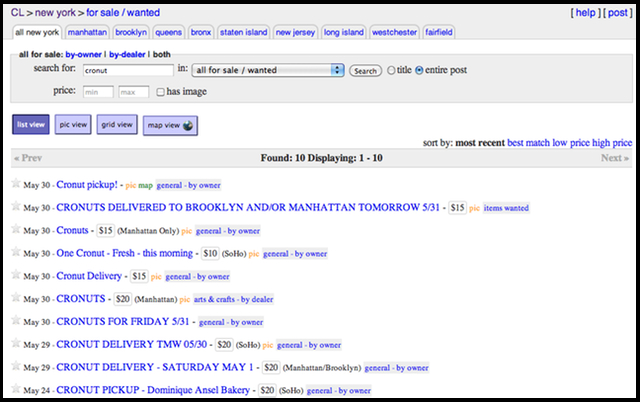 Is cronut crime next? Everyone, be safe and keep your cronuts out of view.

#cronut
#cronut craze
#cronuts
#dominique ansel
Do you know the scoop? Comment below or Send us a Tip