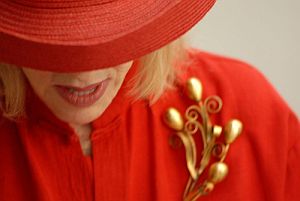 For those just joining us, one Tom Dobrowski posted a Craigslist ad inviting a guest to buy him dinner in exchange for his impossible-to-get reservation at David Chang’s 14-seat Momofuku Ko. Greene took him up on the offer, but last week witnesses from Eater reported that their date was meal by confusion – with Ko’s staff claiming that Dobrowski had canceled his reservation.

When first one, and then a second hostess told me there was no 9:15 reservation for Dobrowski, I was startled and grew anxious. “How can that be?” I asked.

“Don’t worry. When he comes, he’ll have his confirmation and we’ll see,” hostess #2 assured me. Then suddenly, a handsome young man burst through the door, shook my hand and surrendered his email reservation to the scrutiny of the two gorgons... There was some muttering between the two women, but they didn’t summon the FBI, and one led us to our designated infamous backless unpadded wooden stools... Then suddenly, there is Chang himself, “inviting” the happy-go-lucky Dobrowski outside for a chat...

I try not to let the Hitchcockian plot spoil my pleasure in the pineapple sorbet on spicy pineapple... Tom asks for the check – his treat for the pleasure of my company, he says. But the hostess announces there is no check. “Your meal has been comped... I believe Chef Chang feels that if we have made a mistake, you should be our guest and if you have made an error, we don’t want your money.”

Greene goes on to call Chef Chang “stupid and insulting,” his food “uneven” but “brilliant,” and his chefs toiling behind the counter “expressionless Stepford cooks.” But who canceled the reservation? And why? You’re surely on the edge of your seat, so stay tuned for the next 'Hitchcockian' twist in the Momofuku PsyKo saga!

#craigslist
#critic
#food
#gael greene
#momofuku ko
#reservation
#resi
#resy
Do you know the scoop? Comment below or Send us a Tip