The latest Quick Bites brings us to Chelsea for some American classics.

THE VIBE
Chelsea Creamline, a bright and wholesome-looking lunch counter which opened last week in the former Ronnybrook Farms spot in the Chelsea Market, serves a half-dozen or so self-described "American Classics," plus a handful of sides, for both lunch and dinner. The breakfast menu is slightly more extensive, and the ice cream offerings longer still, but this is a focused, efficient operation, where you order at the register, receive one of those number-flag things, and grab a seat (or I guess a "stand") wherever you can find one. A friendly server will deliver your meal momentarily.

Their selections basically read like a children's menu: Griddled PB&J, Corn Dog, Grilled Cheese Fingers with Tomato Soup for dipping, etc. A smart repackaging of Rockwellian-brand nostalgia, appealing to both the hordes of tourists that continue to pack the Chelsea Market as well as the area's army of frazzled tech-office drones looking for food they don't have to think about.

Given that it's 2015, Creamline elevates its offerings in that farm-to-table way—the beef is grass-fed, the chicken free-range, the cornmeal local and heirloom, the jam "house." But they don't gut you with overly-inflated prices for that, in fact, everything on the menu (expect for the most elaborate sundaes) is under $10. 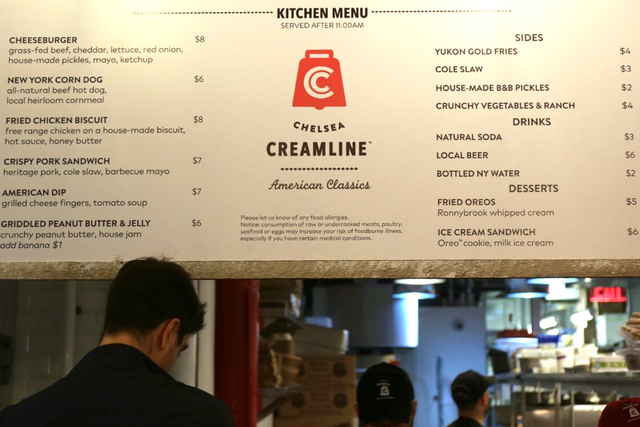 Though Creamline is under different management from its immediate predecessor in the space, Ronnybrook Farms does provide all of the restaurant's dairy products (mostly that means the ice cream) and the decor recycles much from the original, including the milk-bottle hanging lamps and the raw wood planking on the wall.

One of the biggest changes with Creamline is that the front is now completely open to the Chelsea Market mobs, which makes the atmosphere welcoming and likely encourages impromptu milkshake purchases, but it also means that more than a few ignorant tourists and fuck-it locals bring in food from other places to eat in the space.

THE BITES
On two visits to Creamline over the weekend, I was able to try a hefty percentage of the menu. This is not complicated food. You will not feel sophisticated or challenged here. But most of it does taste really good, and it's all satisfying in that way a simple, well-made, low-cost meal can be.

Everything looks and tastes exactly as you'd expect, but better. The American Dip, for example, is just a heavily-buttered, grilled-yellow-cheese sandwich, cut into four strips for easy dunking into the small bowl of thick tomato soup, but it made me happy with each bite, all the way through. Creamline's Cheeseburger also overachieves, the rich, crumbly patty standing up to the glob of melted lactose and fresh and crisp toppings (the house-made pickles are especially effective) all on a soft, heavily-seeded bun.

My order of Yukon Gold Fries was the only real disappointment on either visit—cardboard in texture, so flavorless not even added salt and hot sauce could save them—which is potentially a deal breaker since it's only real carb-based side available. Maybe I'll get one those New York Corn Dogs with my burger next time. 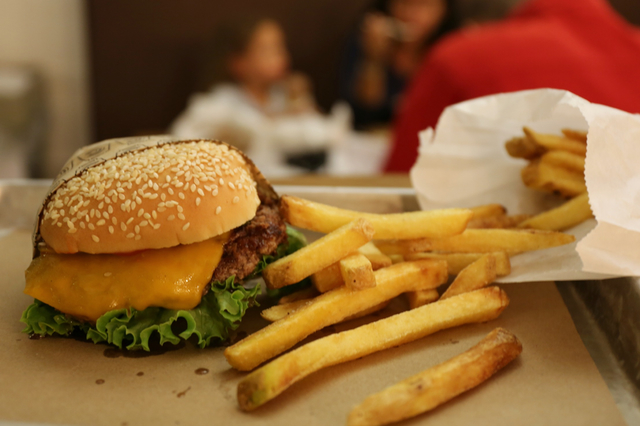 The Fried Chicken Biscuit would seem like a too-on-trend bid for attention at most other new places these days, but something tells me the Creamline folks weren't looking to be included in any of sort of citywide roundup when they put in on the menu. Anyway, this is a fine sandwich, the biscuit a little less buttery than I prefer but well within the acceptable range of moistness, the bird well-seasoned and crisp on the outside, reasonably juicy within, and sitting in a puddle of honey butter and a lively, vinegar-based hot sauce.

And I'm not saying that the Griddled Peanut Butter and Jelly Sandwich with added banana was my favorite thing on the Creamline menu, because that would be ridiculous, I'm not 7 years old... but, uh, yeah, this thing is excellent, in large measure thanks to the homemade blueberry jam.

Dessert-wise, you likely won't regret ordering the Fried Oreos, a sugar-bomb quartet that comes with a side of whipped cream, but I'd recommend something from the ice cream parlor side of the things instead. I had a scoop of no-nonsense coffee, topped with gooey salted butter caramel sauce and a combo of toasted coconut and cacao nibs, and it was delicious.

THE VERDICT
Are you going to be near the Chelsea Market anytime soon or over the upcoming holiday season, maybe dragging along out-of-town visitors? Probably. And though there's no shortage of places to eat once inside this still-booming tourist attraction/office building, Creamline is a solid, crowd-pleasing choice.