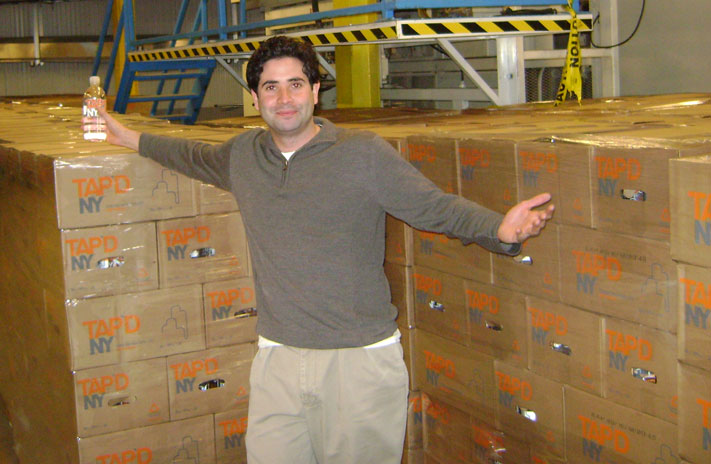 Not too long ago New York's tap water hit the marketplace; bottled and labeled TAP'D NY, the company even suggested refilling the $1.50 bottle from a tap when its empty. Craig Zucker is the man behind the idea, a for-profit business that gets its product from the city's public water system "to source the world's best tasting tap water, purify it through reverse osmosis and bottle it locally, leaving out ludicrous transportation miles." Zucker told us a little bit about his idea, future "water pairings" taking place around the city, and Philip Seymour Hoffman.

How did you come up with the idea for Tap'dNY? It started with the idea that, contrary to what Coke/Pepsi/Fiji and the rest would want you to believe, there's nothing wrong with our local water (certainly nothing worth shipping in someone else's water from 8000+ miles away, or sending your dollars to Fiji and France $2 at a time for). Add to that the question "what would a completely honest bottled water look like?" and all of the sudden people getting really excited.

How do you purify the water before bottling it? You think I'm filling them at my sink, don't you? We're bottling 100s per minute at a local bottler. The purification process is called reverse osmosis. It's a wee bit scientific, but essentially we start with award winning water (New York's) then purify the hell out of it.

Do you think that bottled water has a different taste from NYC tap water? NYC tap water has chlorine in it. You can taste it. By the time we're done though people can't seem to work out which is ours and which is Fiji. Try it for yourself. If you can't tell the difference, isn't it better to buy local?

What are some of the biggest myths about tap water? The main myth is that it's dirty. New York City is one of only 5 major cities in the country that comes from such a pure source that the EPA doesn't require filtering at all. It comes from upstate, on it's own power (the whole system is on a slope) and it's pretty good. If you're seeing discoloration or other impurities, it's probably taking place in the last 100 feet. The pipes inside your building aren't always the best.

Is there any state/city's tap water that you'd rather not drink? People should check with their local water authorities to see if there are any issues. The good news is 95% of the US has fantastic water. And personally I drink tap water whenever it's available.

What has been the general response to Tap'dNY? Really great. People seem to understand the concept. I get calls all day every day from people looking to buy it elsewhere, but I'm not willing to ship. If Tap'dNY winds up in LA (and it probably will) it will be because we're purifying their water for them, not shipping them ours.

There has been an event featuring "water pairings" at a restaurant using Tap'dNY, can you tell us how that idea came to fruition? And do you have any more events in the future? Essentially, we wanted to bring together some local-minded locals and introduce them to their local food and drink to get them thinking local… and we wanted to do it free of charge. Our first was hosted by Dogmatic Restaurant (home of a unique and locally sourced gourmet sausage system) and was really fun. Next up, we've got a mystery restaurant (too many crashers the last time for us to just post the details now), Tap'dNY and a few other local treats on the menu. All of it free. Hungry? Sign up at locallytapd.tumblr.com, we've only got 50 seats, but we'd love to have you.

Please share your strangest "only in New York" story. No joke, I saw a squirrel and a pigeon fighting over a piece of chewing gum. This recession is hitting everyone hard. But we're all in it together and we'll all get out of it together if we support our own.

Which New Yorker do you most admire? Philip Seymour Hoffman. Incredible actor. But also everyone I know who sees him on the street has overwhelming good luck come their way immediately after. Really. I've got 6 friends with stories that prove that the Hoffman Effect is real. I'm starting to think there's a book in it some place. If Tap'dNY had a celebrity spokesperson, I'd love for it to be him. Think he reads Gothamist?

Given the opportunity, how would you change New York? We're talking about giving the city the money to turn back on all of the broken water fountains so everyone can have access to water again… but I've got a lot of ideas beyond that. I'm an idea guy. Ooh, here's a fun one I did the other day, text "where is" and the name of a bottled water to 30644, and my system texts you back how far that bottle traveled to get to you. We're still working out the kinks, but it's free and fun, give it a go.

Under what circumstance have you thought about leaving New York? Every time the Giants play across the river. Other than that, not all that often.

Do you have a favorite New York celebrity sighting or encounter? I told you about Philip Seymour Hoffman, right? What I might not have said was that I saw him too. It was the day Tap'dNY got funded.

What's your current soundtrack? Kanye West is on the stereo now, but the jury's still out. Bill Withers is my heart.

Best cheap eat in the city. Dogmatic is a good place to start. You can get a whole meal, made with gourmet, locally sourced ingredients, for less than $10. I'm also partial to Katz's deli, the Chinatown Ice Cream Factory (taro is amazing), and Rosario's Pizza.

Best venue to see music. If you ever get the chance to see anything at Radio City Music Hall do it. They only get great acts once in a blue moon, but if you see Philip Seymour Hoffman on the street, your next stop should probably be Radio City to find out who's there. Odds are they're your favorite band and they've got one seat left. It's the Hoffman effect! That guy is amazing.