Course This: Achatz Responds to Bourdain and White 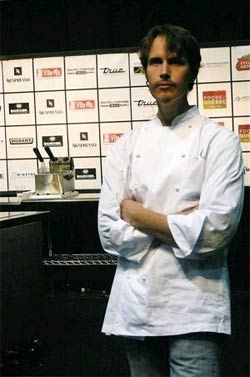 Yesterday, chef Grant Achatz of Alinea was slated to deliver a presentation on his eclectic serving implements (the antiplate, tripod, and squid) at the StarChefs ICC. First, however, he had a few words in response to “something that came up with a group of gentlemen,” referring to Anthony Bourdain and English chef Marco Pierre White’s controversial Sunday night panel.

White claimed that 18 course (or more) tasting menus consisting (sometimes) of nontraditional food are injurious to some authentic ideal of cooking, and that a meal with an amuse guele, two courses, and pudding would suffice, thank you. (Frank Bruni also has a problem with tasting menus). “If what I do is pointless, then maybe what Wylie does, what Andoni does, what Jean Georges does, what Charlie Trotter does - maybe it's all pointless,” Achatz said, pacing the stage restlessly.

Achatz, who was the subject of a sprawling New Yorker profile in June, offered a response to his fellow chefs’ dislike for tasting menus, but also to his cooking, sometimes called molecular, sometimes called techno-emotional. “It’s cooking by numbers,” White said on Sunday, seemingly contradicting his previous kind words about Achatz’s cooking. Achatz said that "eating a ripe tomato sprinkled with salt can be a profound emotional experience," but that "there’s room in cooking for more than a piece of fish, roasted on the bone with salt, a squeeze of lemon juice, and olive oil."

By way of example, he shared photos of his food at Alinea. One series of “functional centerpieces” featured a thin slice of wagyu beef, frozen in liquid nitrogen, and suspended from a steel wire at the table. Guests enjoy it visually as they’re served their first few courses, not knowing what it’s for exactly and anticipating its involvement with the meal. Within 27 minutes, the meat melts and turns bright red; when the 5th course arrives- a roasted matsutake mushroom with vinaigrette- the server drapes the raw wagyu on top. Case in point: nothing at Alinea is pointless, not even the centerpiece.

Achatz addressed the perception of chefs who make untraditional food as absent-minded, mad professors with blowout, unkempt hair. “We don't take ourselves too seriously,” he said, “we know it's weird to serve food on something that’s growing” (a slide of a course served on a patch on live greens popped up) “it’s supposed to be fun.” He admitted that some guests refuse to lean forward at a four star restaurant to eat something without their hands as it dangles off an antennae in front of them, “it’s embarrassing, it’s challenging, it’s unexpected. But when is pushing people to think a bad thing?”

Photo: Achatz taking a question from the audience at StarChefs.