We haven’t been that impressed with much of the corn in the city so far. Much has been shrink-wrapped and as yellow as a Crayola sun, a sure sign of tough, dry ears. But not any longer. Fairway has a nice batch of bi-color corn that’s slightly sweet, juicy, and at a fairly remarkable price to back it up. At $1.99 for eight ears of corn, you’ll have enough corn for any large gathering and more leftovers than you’ll ever know what to do with.

Grilling corn is one of the finest ways to use up this summer staple. We stole a little recipe from the Red Hook Ball Fields the last time we were there. First grill the corn with the husks on until the outside has slightly blackened. Then remove the husks and quickly char the kernels. Slather it with a little mayo (sounds wrong, we know) and then sprinkle a nice grated hard cheese all over. 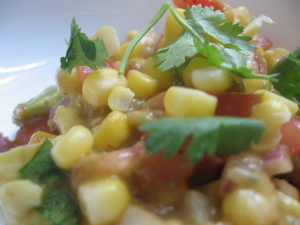 For those without the grill, there’s nothing wrong with boiling. Remove the husks and toss it in a boiling pot of water for 4-6 minutes. It’s ready to go from there, but don’t think you need to keep it on the cob. One of our favorite recipes, especially when it is hot, is to make a corn salsa. While three corn cobs are boiling away, chop one medium onion, two tomatoes, and one avocado. Combine the veggies in a bowl and add the juice of two limes, a couple dashes of hot sauce, and a sprinkle of both cumin and chile powder if you’re in to such things. Then remove the kernels from the cob with a large knife, mix everything together, and let sit undisturbed for 30 minutes, though you can just start munching right away. The flavors will not have melded the same way, but it sure did taste fine to us.