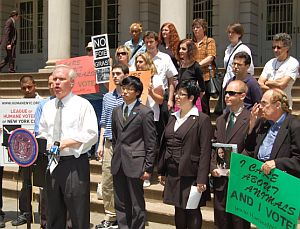 City councilman and mayoral hopeful Tony Avella held a press conference today at City Hall to spotlight a pending council resolution urging the New York State Senate to outlaw force-feeding ducks and geese to produce foie gras. A bill to ban the practice is languishing in Albany, and Avella hopes his largely symbolic gesture will push it forward.

Yesterday Avella told the Village Voice that though there are only two foie gras farms in New York State, he feels legislation is necessary to stop the force-feeding, which artificially enlarges the animals’ livers and causes other maladies. The proposed state law would not ban foie gras, just the force-feeding, which at least one foie gras farmer in Spain has proven unnecessary by feeding his animals naturally.

Michael Ginor of Hudson Valley Foie Gras, assured the Sun that “there is nothing harmful, painful, or inhumane about the production of foie gras.” For another perspective, here’s a link to some photos ducks and geese at a foie gras farm obtained by The Humane Society, who joined Avella with other animal rights activists at City Hall today.