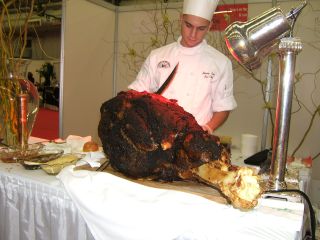 Last weekend the first-ever “Cook. Eat. Drink. Live,” event turned Pier 94 into a top-shelf playground. Gourmets and gearheads alike flocked to the furthest reaches of West 55th Street and found much to drool over thanks to an extensive roster of wines and spirits and a fleet of luxury cars ranging from a stately Rolls Royce to a sleek Spyder.

Although nobody let us, or anyone else, fire up a fine motorcar, there was ample opportunity to try premium tequilas, vodkas, rums and whiskys. Only a few wowed us. One was Don Julio Blanco tequila. We've sipped and slammed more than a few premium tequilas in our day, but never thought we'd be use the words butterscotch and tequila in the same sentence.The butterscotch aroma was amazing, all the more so since were sipping just a wee bit out of a tiny plastic cup. There was also plenty of wine to be sampled, along with education provided by well-informed reps from each vineyard.

Rather than risk liver damage by sampling all the libations, we availed ourselves of the fare provided by a diverse roster of New York City eateries. If only for its sheer display of force Tavern on The Green’s gargantuan steamship roast caught our attention. And then we tasted it. Slices from the outside of the Flintstonean haunch combined a savory crust with bits of fat and luscious beef.

Not that we have a beef fixation, but Abboccato’s sumptuous carpaccio -- paper thin rounds of deep red raw flesh slicked with a splash of olive oil and sprinkled with toasted pumpkin seeds -- also bears mention, if only to prove that ultrathin slices of raw beef are every bit as good as a steamship roast, which by appearance seems to have been invented by the Vikings.

Amidst all the hubbub we missed presentations by Sam Mason, Will Goldfarb and Ilan Hall. We found solace in a mixology session. After all, how often does one get a crash course/tasting on mescal, tequila's often overlooked and smokier brother, from Junior Merino aka "The Liquid Chef."