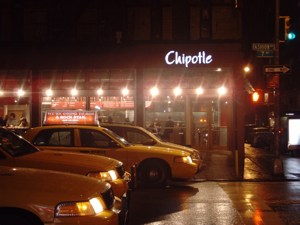 Tin foil-hat conspiracy theorists take note: this ravenous city will soon be flooded with a multitude of free (or cheaper-than-usual) tin foil wrapped burritos over the course of the next few weeks. These truly are the end of burrito days! Or at least the end of the year. Don't believe us? Here's proof that the burritopocalypse is fast approaching:

Serious Eats reports that today from 5-7 p.m. at the West 45th StreetChipotle location (and also on December 9th and 16th at the same time) free burritos will be given out during short performances by local singer-songwriters. Listen to the acoustic song lyrics for esoteric clues regarding next year’s burrito giveaway dates.

The 23rd NYC location of Chipotle will "coincidentally" open at 23rd Street and Lexington this Thursday. As is customary tortilla warmer warmup exercise, the store will open its doors a day early for a promotion, but this one’s a bit different: in conjunction Baruch College’s Relay For Life fundraiser, on Wednesday the 3rd from 5-9 p.m., $5 buys any single Chipotle menu item, be it a burrito, an order or tacos, salad or a bowl. That comes with chips and a fountain drink, and all proceeds go to the American Cancer Society. Did anyone see that Jim Carrey movie where he lays out salsa epistemology at the 23rd Chipotle location on 23rd Street?

“The last new” Chipotle location to open in the city in 2008 will do so next Thursday on the 11th, at 274 Madison Avenue and 39th Street. So for the first time in history, it’s going to start raining burritos. Free burritos, that is, on December 10th from 11 a.m. all the way to 8 p.m. [via Grub Street]