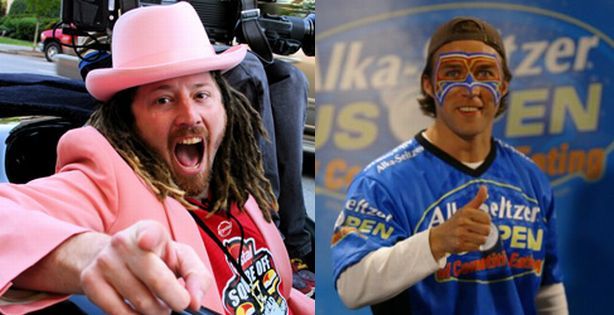 Attention competitive eating fans – hey, stop snickering; it’s a legitimate sport regulated by an International Federation! As one fan site says, "For those of you who doubt it's a sport, try making your body consume 20 pounds of food in 10 minutes." Anyway, C.E. fans will definitely want to plan for an extra-long lunch break on Tuesday, May 20th, when two of the world’s biggest "gurgitory gladiators" will lock horns in a Battle Royale for watermelon eating dominance.

The face-off will pit Timothy Janus, AKA Eater X, against Crazy Legs Conti. Janus is the tiramisu-eating champion off the world and set the record for tamales by downing 71 in 12 minutes; Conti’s a regular at Nathan's Famous Hot Dog Eating Contest and wowed fans by eating his way out of a 96-cubic foot sarcophagus of popcorn at the debut of his own movie, Zen and The Art of Competitive Eating.

Besides cheering on their favorite eater, fans will also get to play around on Nintendo’s WiiWare channel, which just came out with Major League Eating: The Game. The video trailer for the game, which we posted last month, is distinguished by some virtual competitive vomiting.