Competitive Eating Season Not Over Yet 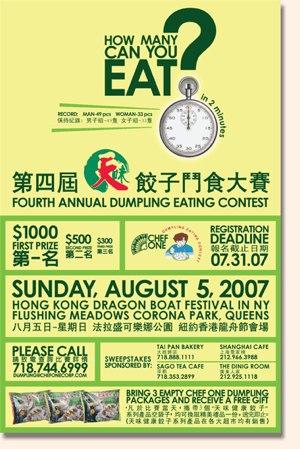 While the residual mustard stains have barely dried from last week’s extremely popular Hot Dog Eating Contest at Nathan’s Famous, it seems like the realm of competitive eating in NY has reached an overdue “I’m full” saturation point. So it’s only in the interest of each borough having its own event that we bring you this next story- the 4th Annual Dumpling Eating Contest, taking place on Sunday August 5th as part of the Hong Kong Dragon Boat Festival in Flushing. For all of those who watched Joey Chestnut eat 66 weenies last week and exclaimed, “Hell, I can do that,” here’s your chance: the Dumpling Eating Contest is accepting registrants until the end of the month. Dumplings used in the competition are of the chicken and vegetable variety; according to the contest’s poster, current records are “Man- 49 pcs., Woman- 33 pcs.” at the two minute mark. So, um, let’s go ladies! Sponsors for the contest include Chef One Dumplings and the Tai Pan Bakery in Flushing, whose Village Voice listing says features “innovations like “Special Taste Mixed Hot Dog.”

Speaking of Special Taste Mixed Hot Dog, we were alerted yesterday to another, upcoming Brooklyn event that will feature a massive amount of hot dogs, roughly half of which will undoubtedly be very special. The 2nd Annual Great Hot Dog Cookoff will take place Saturday July 28 from 3-8 PM in Fort Greene. While it’s not (thankfully) an eating competition, proceeds from each $15 Cookoff ticket will benefit the Brooklyn Animal Resource Coalition (BARC), a no-kill animal shelter based in Williamsburg. The Cookoff is roughly divided into two judged categories: the “classic,” archetypical hot dog, and the no-rules “twisted dog.” Entries in the second category have to taste good, however. Bring on the goat cheese and pignoli hot dogs. Space is limited; buy tickets here.