Come For The Fried Chicken, Stay For The Sandwich At Newly Opened Delaney Chicken

Of the many enticing dining options inside the new UrbanSpace Vanderbilt food hall near Grand Central, the new fried chicken enterprise by brisket master Daniel Delaney was by far the most hyped by food media—this website not excluded. When it comes to fried chicken, we get excited.

The man known for his superb barbecue had been thinking about and tinkering with fried chicken for nearly a year. "There wasn't really the type of chicken that I wanted to have in the city, stylistically, and so that's something I'd been feeling for a long time," he explains of his concept. "I just think that a lot of the southern-style fried chicken is very similar. It's great, but it's very similar, where they're dredging the chicken in flour and then it's being fried."

Instead of a simple seasoned flour dredge, Delaney and his team—which includes former Bark Hot Dogs general manager Eli Cohn-Wein—employ a wet batter, which Delaney calls "more rewarding" to bite through after it's fried. "It's a very different texture cause it's not just skin," he says. "It becomes these cracked open layers of crunch that you bite through, and I think that's cool and I like that, so it's something that I wanted to do." 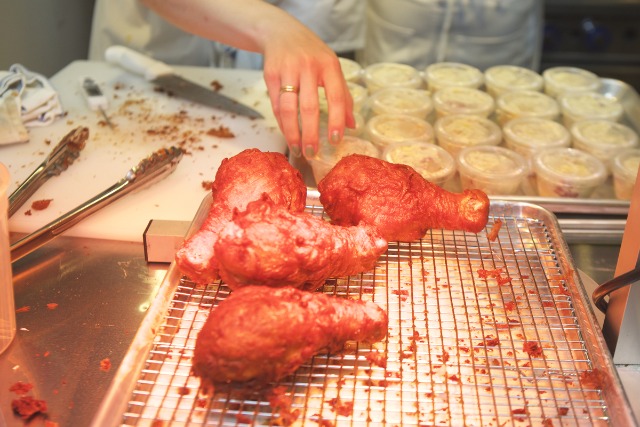 Visitors to NOLA's famed Willie Mae's Scotch House, founded by Wille Mae Seaton who recently passed away, will recognize the crunchy, amber exterior of Delaney's version. It's got a puffy crust that's airier than the nooks and crags of a purely flour-dredged bird. The two enormous drumsticks I tried—seriously these must be monster chickens!—were hot and juicy beneath the layer of batter and skin. It may just be a symptom of the cut (I'm more a thigh girl), but there were some bits that weren't easy to bite through.

Seasoning-wise, Delaney's keeping it simple. "It's like four flavoring ingredients, it's not like there's some magic sauce or secret recipe," he says. "Most chicken is not really spicy or spiced in the city. Ours is. It's definitely a good amount of heat." I couldn't detect much spiciness in my drumstick, but heat levels vary from person-to-person, and as with most places that've just opened, it takes a while to lock in consistency. 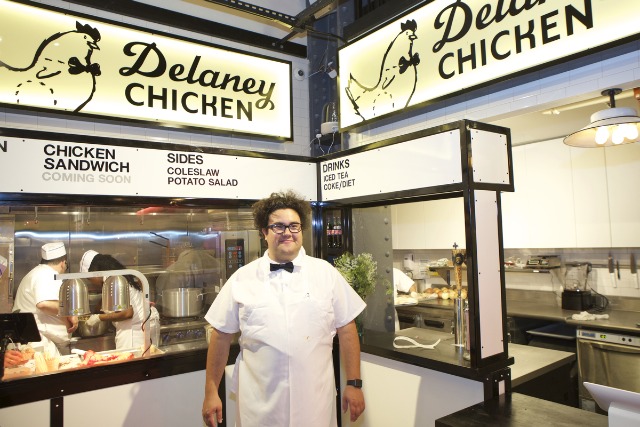 Yesterday, Delaney Chicken debuted their first sandwich offering, a spicy chicken creation that I found to be more delightful than the drumstick. Cohn-Wein told me it's an ode to places like Chick-fil-A or Wendys—fast food chicken sandwiches admired by himself and Delaney. A deboned-chicken thigh comes on a potato roll with house-made bread and butter pickles, Crystal hot sauce and Duke's Mayonnaise, a popular brand in the south. It's simple, unadulterated comfort food made special by that unique (to these parts, anyway) batter.

I'd return to Delany Chicken more frequently if navigating the congested streets around Grand Central weren't so headache-inducing. The chicken, especially the crust, was flavorful and took me back to fond memories of New Orleans. I overheard some suit complaining about the prices—a box of two chicken pieces goes for $10 and the smallish-sized sandwich for $8—but that's on par with other fried chicken options at this point. If you want cheap, wait for Chick-fil-A.