Yesterday, the Columbia Spectator revealed that Columbia University's dining services were on the losing side of a Nutella battle. Specifically, "Since Dining started offering the sweet spread in Ferris Booth Commons last month, administrators have observed a high demand for Nutella—up to 100 pounds per day... At that rate, Dining would spend $250,000 on the product in one year."

Vicki Dunn, executive director of Dining Services, wrote in an e-mail, "The demand [for Nutella] has been greater than originally expected. Students have been filling cups of Nutella to-go in Ferris Booth Commons and taking the full jars out of John Jay, which means we’re going through product faster than anticipated." Apparently Nutella was just introduced to Columbia students in mid-February, and Dining Services spent $5,000 a week to keep up with students lust for chocolate-hazelnut spread!

A student council rep, Peter Bailinson, class of 2016, said, "When you’re paying that much for a dining plan, some people feel a bit more entitled to taking things from the dining hall. But what they don’t realize is that dining uses any extra money to get awesome new items like Nutella, almond butter, and to make structural changes like the JJ’s renovation." ALMOND BUTTER! 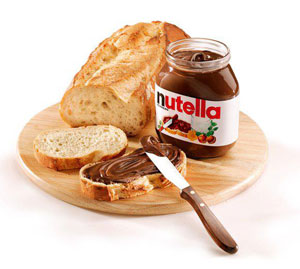 Apparently some students have argued that Columbia is spending too much money on its Nutella. In fact, according to Gothamist's calculations, buying this case of 15 jars of Nutella would be equivalent to $5.28 per pound—$3,696 a week for 700 pounds of Nutella and $192,192 over the year. Also, this assumes that the same number of students will be on campus during the summer months. In short, there's probably enough money at Columbia to support students' Nutella addiction AND buy almond butter.

#chocolate hazelnut spread
#columbia university
#expensive
#nutella
#theft
#tuition
Do you know the scoop? Comment below or Send us a Tip