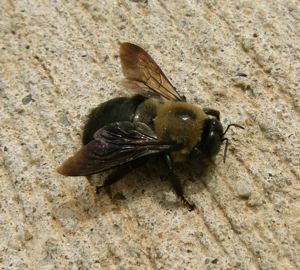 In his new book, Fruitless Fall: The Collapse of the Honeybee and the Coming Agricultural Crisis, author Rowan Jacobsen describes the effects of Colony Collapse Disorder (CCD) on beekeeping throughout the world. While the exact cause of CCD remains unknown, it clearly has the makings of a major agricultural crisis: Pollination is required in the life cycles for most every facet of our food supply. Among the nastier discoveries Jacobsen makes while telling the CCD story is that some industrial honeybees are forced to slurp down their share of high fructose corn syrup. Fall is also a DIY book; its appendices lay out resources for tyro beekeepers, including a breakdown of beneficial, bee-friendly “pollinator plants.”

Tonight, Jacobsen, who also wrote A Geography of Oysters, will be appearing at Savoy with oyster grower Chris Quartuccio, who farms the only true Blue Point oysters in the world. Blue Points and other varieties will be served on the half shell, with three courses. Call Savoy for more information. The book is also available in bookstores. We asked Jacobsen a few questions about planting pollinator bee gardens in the city, (illegal) urban beekeeping, and what the high fructose does for our little winged friends.

Is it worth it for New Yorkers to set up flowering window boxes as way stations for urban bees even if they don’t know where the bee hives are?Pollinator bees tend to be superbly designed for tracking down flowers- good eyes, great sniffers, and solid memories. They'll find what's out there and a window box full of good pollen or a nectar-producing plant is a windfall for them. I should also mention that when they're out foraging, bees are extremely unlikely to sting. I often watch bumblebees, and lean so close that my nose is practically in the flower with them. They don't care.

What exactly is the connection between honeybees and high fructose corn syrup (HFCS)?
In modern "feedlot" beekeeping, bees are unloaded in yards where they await their next pollination job. Gallon jars of HFCS are placed on top of each hive for food; the old thinking was, sugar is sugar, whether it comes from flower nectar or HFCS. But researchers are learning that this is not at all the case. Flower nectar is full of vitamins and minerals; HFCS is not. It's kinda like the difference between drinking freshly squeezed orange juice and Sprite. Also, it turns out that bees get lactic acid bacteria (the same stuff we get in yogurt) from flowers, and this is essential to their health and immune function. They even make a yogurt-like substance (called bee bread) in the hive from pollen. A little HFCS won't hurt bees, but a diet of nothing else is as bad for them as drinking nothing but Sprite for a month is bad for us. Also, if HFCS gets hotter than 100 degrees, which it often does when exposed to the sun in southern areas, it generates compounds that are toxic to honeybees.

Urban, illegal, rooftop beekeeping: according to Section 161.01 of the NYC Health Code, it’s illegal. But is it a good or bad idea for someone who is serious about it? Great idea! NYC doesn't need much pollination (except for a few community gardens), but it could generate quite a bit of its honey needs. A city has a surprising number of flowers and fewer pesticides than a typical agricultural environment. And beekeeping is an extremely entertaining hobby. You have to jump up and down on a honeybee, or kick over its hive, to get it to sting you. Yellowjackets, on the other hand, they sting if you look at them funny, and bees often take the blame.

Cool. Where do you eat when you're in New York City?This trip I'll be hitting Savoy, Five Points, and the Four Seasons for a book release party. I always check out Aquagrill and Grand Central Oyster Bar to see what's new in the world of oysters. And I seem to always find myself scoring some octopus balls at Otafuku on my way to the Russian and Turkish Baths. I'm a sucker for anything with writhing katsuobushi flakes on top of it.