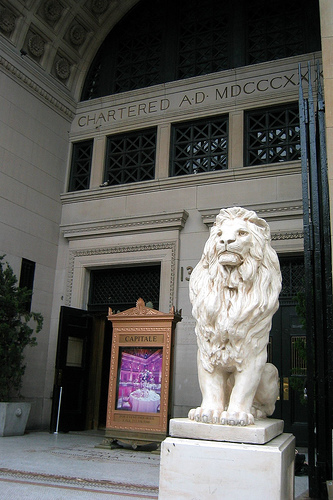 Will Manhattan's clubs be moving to the 10013? With the group that opened Cain on 27th Street having opened Gold Bar at 389 Broome Street in February; and uber-promoter Danny A having opened the VIP-only Upstairs on Spring Street and Broadway, The Observer is reporting on a move of "clubland" to Chinatown.

Following the flock is former model Emma Cleary who purchased Double Happiness at 173 Mott Street. The lounge will open as a "hip speakeasy" by Thanksgiving. She's not the only one heading downtown, either. Nightlife brokers have been checking out the location for prime real estate, determined to make the area the Meatpacking District Part Two. Who can you expect in their establishments (if you get in)? One person at Gold Bar says, “It’s not the normal cast that you find at 27th Street. The other night, there were a bunch of finance guys on one side of the bar and a pro skater who was in town from Jackson Hole on the other," further stating he has "set the tone for the area." We just got chills (the bad kind).

We suppose with places like Capitale (pictured) in the old Bowery Savings Bank building...this really shouldn't come as a surprise. We were warned of this via a 2004 press release (PDF) from ExploreChinatown.com which stated, "nightlife in Chinatown has gone way beyond karaoke in the last several years. These days, the neighborhood is home to one of the biggest special events venues in Manhattan..." But then they listed three karaoke bars and an open mic spot called Teabag, so we didn't take them seriously.