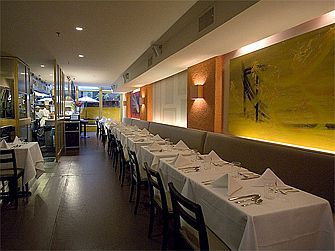 There’s such a dizzying number of ways to throw money away on New Year’s Eve that it’s always tempting to just stay home and avoid the throngs of staggering amateurs altogether. But what to do about dinner? If you're not in the mood to cook, it's really not such a bad night to sample some of the New Year's Eve restaurant specials, as long as you're willing to a few extra bucks. Rather than deluge you with a mind-numbing list of restaurant recommendations, we’ve winnowed it down to a manageable number of not-outrageously-priced options, all things considered. As of last night all of them were still accepting reservations for the 31st.

High concept Mexican restaurant Crema (pictured) takes their concept higher on New Year’s Eve with a curious menu inspired by Frida Kahlo’s recipes, lifestyle, and art. The $130 prix fixe features dishes somehow influenced by some of Frida’s famous lovers, like Trotsky. A few of the sauces will be presented with paint brushes for the guest to “paint” their meals; there will also be a Frida Kahlo Tequila tasting and Diego Rivera inspired punch. Two seatings at 7:30pm and 10pm.

The four course menu at the West Village’s Agave – a southwestern fusion restaurant with a wide tequila selection – boasts such options as Carnitas of Berkshire Old Black Spot Pork, grilled Wagyu Kobe Beef Skirt Steak with wild mushrooms and smoked chile-scented demi-glaze over masa chips, and Mayan Lobster steamed with chipotle butter. The prix fixe is $80 and entitles you to a champagne toast and the chance to chew in rhythm to the live Latin jazz stylings of Tropical Turburlence featuring Emedin Rivera.

Williamsburg’s eclectic performance art/restaurant Monkeytown is chin deep in their annual Porn Week, but come Monday night they’ll be welcoming diners for a less graphic – and less expensive – New Year’s Eve experience. Just $35 gets you a three course dinner with champagne toast; menu highlights include chipotle gorgonzola lasagna with black beans, watercress served with grilled asparagus and, for dessert, a Curried Bacon Cheesecake with Stewed Apples, Green Apple Sorbet. Sit in the back dining room to watch massive video projections of Zindane, which “is based on a gloriously simple and audacious idea. To train the camera on the great footballer over the course of a single match: 90 minutes, in real time.” For an extra $20 at midnight, you can stick around for an “electro extravaganza” featuring bawdy hip hopper Bunny Rabbit.

Also in Williamsburg, the elegantly designed and Michelin-approved Dressler will be serving a three course prix fixe for $75. Owned by the guys behind the stellar Dumont Burger, Dressler has never served us anything that we didn’t want seconds of. On New Year’s Eve you can choose from such entrees as Whole Maine Lobster with Cippolini Onion, Fresh Cranberry Beans & Foie Gras Butter, or Braised Pork Shank with Braised Red Cabbage, Creamy Spaetzle, Apple & Whole Grain Mustard. (We’ve got our eye on the goat cheese cheesecake for dessert.)

East Village vegetarians will find it hard to beat Counter, that “sexy and sophisticated” restaurant with such irresistible organic cocktails as the “root beer float”: sarsaparilla, wintergreen & vanilla-infused vodka with Tahitian vanilla ice cream. Their New Year’s Eve prix fixe is all about the sparkling wine, though; the five course feast is paired with five fizzy glasses from around the world. (The menu notes each vineyard’s environmental practices.) $85 for their typically delicious food, an extra $35 for the five sparkling wine pairings.

Way uptowners near Columbia can stay close to home and settle in for a $120 prix fixe at the warm and cozy Bistro Ten 18, where from 10pm to 1am a live jazz band will provide the soundtrack to your four course dinner and champagne toast. Their special of the week – a stuffed cabbage served with Tomato Broth and Kielbasa – is said to be “the real thing; our Chef’s grandmother gave us her recipe.” But really, the stone fireplace is what puts this option over the top.

Also, reservations are still being accepted for the “Dark Dining” event at Camaje Bistro in the West Village, in which participants are served a multi-course meal while voluntarily wearing blindfolds.