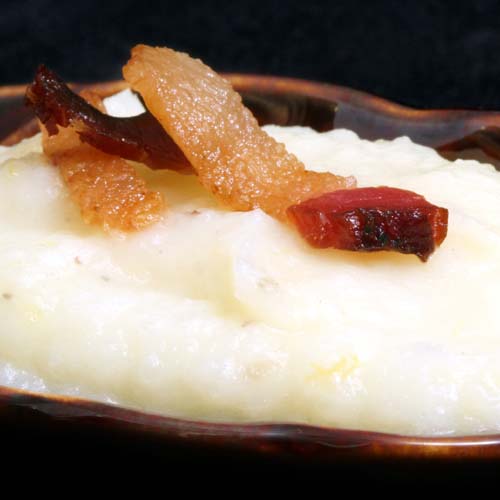 This puree was inspired by a dish we had at Alinea, during the most impressive meal we have ever been served. The dish that inspired us was lobster (butter-poached, we believe), served with lobster mousse, sunchoke puree, and sweet orange, all surrounded by the hyacinth aroma released by boiling water being poured over hyacinths in the larger bowl holding the smaller bowl of edible food. It was one of the most luxurious experiences we have ever had, and it entirely justified our weekend jaunt to Chicago for the sake of one meal at Alinea.

How can we bring the faintest suggestion of this wonderment back to our fundamentally time-pressed readers back home, we wondered. Well, not many people are going to cook lobster at home. That's just uncommon, for some reason. (We suspect most people are reluctant to experiment on spendy foods, and also squeamish about killing their own meats.) Likewise, putting together a dish of hyacinth aroma isn't very likely for most home cooks, intoxicating as it was. So, citrus and sunchokes remained.

Here is a pared down, but still completely delicious, ultra-simple side dish, pairing the lush simplicity of creamy sunchoke puree with the brightness of clementines, which we vastly prefer to oranges, anyways.

As for the garnish, well, all things are improved by homemade bacon. Recipe after the jump.

Peel the sunchokes, chop them into 1 inch chunks, and simmer 10 minutes in salted water. Drain, then puree with all ingredients except argan oil and bacon.

Cut your bacon into little strips and fry it up. Remove it to drain on a paper towel covered plate.

Reheat the puree, and stir in the argan oil. Serve garnished with bacon and a pinch of zest.

You can occasionally find argan oil, which is a really fascinating Moroccan nut oil, at Sur La Table or Dean and Deluca in SoHo.

#As
#chicago
#clementinesunchokepuree
#cooking
#Danielle Sucher
#food
#people
#recipe
Do you know the scoop? Comment below or Send us a Tip