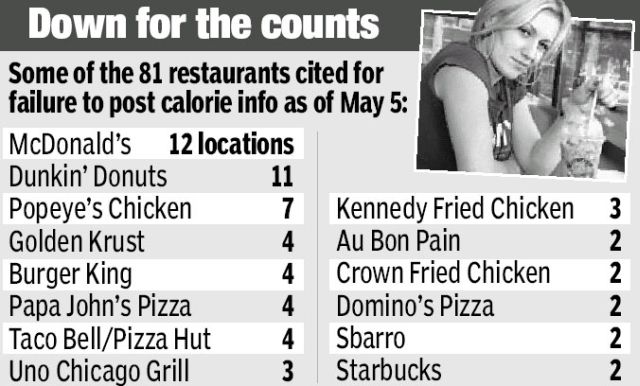 The city’s Health Department has been schooling restaurants on the new law that requires any eatery with over 15 locations nationwide to display calorie information on all food and beverages. After numerous lawsuits from the New York State Restaurant Association, a judge ruled that the city could impose the new law, and it went into affect May 5th.

But many restaurateurs are ignoring the directive, and the Health Department has been citing them with gusto. 81 chain restaurants have been cited, though the city will hold off issuing fines until July 18th, at which point scofflaws could be forced to pay as much as $2,000. "We see this as an educational period. We are not issuing fines, we are trying to help the owners of the establishments understand the new rule," Health Department Deputy Commissioner Jessica Leighton told the Post.

Leighton estimates that about one quarter of the 2,000 restaurants affected by the rule are currently in compliance. Among them are the Dunkin’ Donuts at 243 Third Avenue, managed by Amin Bashirul. After he posted the info, he’s watched his customers change their habits, telling the Post, “I got one customer, he used to buy one of these [630-calorie chocolate-chip muffins] every day. He didn't buy it today. He bought something else.” And McDonald’s CEO Jim Skinner recently blasted calorie info laws at a Chicago trade show as “redundant and flawed.”

#board of health
#calorie information
#calorie regulation
#city
#fast food
#health
#mac
#new york
#new yorkers
#obesity
#the city
Do you know the scoop? Comment below or Send us a Tip