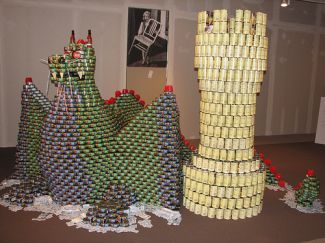 The city’s food charities are dealing with dire shortages this year, exacerbated by cutbacks in federal food aid. Many places like St. Benedict the Moor Neighborhood Center in the South Bronx are almost barren; according to today’s Times, the center’s pantry used to be stacked up to the ceiling with food but now holds just “a few sacks of potatoes, some cornflakes, juice and peanut butter.” To help fill the void, City Harvest, the non-profit organization that gathers and distributes unused food, has been stepping up its efforts to secure donations from tri-state farms.

The group is spending about $28,000 to reimburse farmers for their sub-par produce, which might otherwise be plowed under. Area farms used to hand over the excess harvest for free, but in recent years farmers have demanded a little extra incentive to help cover operational costs. The Times spent the day riding shotgun with a City Harvest van as volunteers scored a sweet haul of radishes that had been languishing in fields 60 miles north of the city. City Harvest’s Jennifer McLean managed to cut a deal with the farm’s owner, Joe Sidoti, for five tons of radishes at 16 cents a pound. She also nabbed eight tons of onions and acorn squash for about $1,100.

The Yorkville Common Pantry in East Harlem was especially grateful for the squash because there “was absolutely next to nothing that had a holiday flavor available.” In particular, there’s been a shortage of donated Thanksgiving turkeys in recent years. Last year City Harvest drivers spent the day before Thanksgiving racing around town to snag extra turkeys from businesses like Scores, the popular strip club. Mmmm, Thanksgiving dinner at Scores! We can’t help but hear the voice of Chris Rock screaming in disbelief: “How the fuck could you eat at a nasty ass strip club? Are you that hungry?” The cover charge at Scores is obviously out of reach for most folks who are that hungry, so it’s great that City Harvest can bring a taste of the strip club to them.

Photo [CRED] from Canstruction '06, the design competition/food drive that donates all cans to City Harvest.