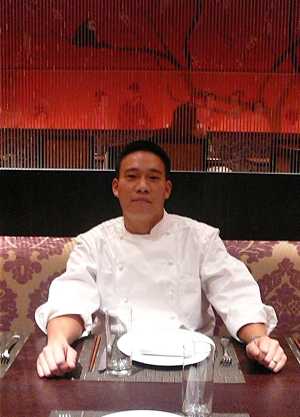 A veteran of Nobu and Ruby Foo’s, Chris Cheung was hired 5 months ago to replace Patricia Yeo at Monkey Bar, the red satin and black lacquer midtown institution known primarily for its, well, monkey theme. In an effort to reemphasize the food quotient of the restaurant, the 38 year-old chef maintains an inventory of global tastes and reassembles them using the template of traditional Chinese food: The curly fries, for example, that come with the burger are made with taro, and the burger itself is served on a bao bun made in-house. The result is not fusion, or an eclectic cook-by-numbers approach to food; Cheung seems to spend a lot of time thinking about ingredients, so the food at Monkey Bar isn’t really served with anything added for dramatic effect, and the plate presentations are relatively uncomplicated. Cheung calls his style “Evolutionary Chinese Cooking.”

For Chinese New Year on Thursday (and through February 13th), the chef has added more traditional touches to complement his menu including a shrimp with lobster sauce (for prosperity), served with fresh wonton noodles (representing longevity). We sat down at Monkey Bar with Chris Cheung to talk about his food, got some tips for Chinatown dining, and found out how he might have inadvertently changed the modern restaurant world by paying careful attention to black cod.

How did you end up here at Monkey Bar?
Two paths converged: One of them was that I left Almond Flower Bistro in Chinatown. That restaurant allowed me to sort of set the stage for what I'm doing here at Monkey Bar- I didn't know it at the time, of course. I've always wanted to do Chinese food since I grew up in Chinatown and I'm Chinese, and this is the perfect setting for that.

You grew up in Chinatown?
Yep. My cousin still lives on Mott Street, in an apartment my grandmother had moved into 50 years ago.

Can you talk a little bit how your culinary background up until Monkey Bar?
I was part of the opening team at Nobu doing Japanese food, cooked Thai at Typhoon Brewery but again, I've always wanted to do Chinese food. I never got to sink my teeth into it professionally, and Almond Flower really allowed me the opportunity to do that. Being in the middle of Chinatown I got a lot of advice and tips, and learned some new techniques along the way. Things went a little bit south, I guess, at Almond Flower, but on the other side of that was Monkey Bar: When the original chef didn’t work out, the Glazier group looked for a new chef. It’s an amazing environment here for me to showcase my food, so I jumped at the opportunity.

You call the food you're doing "Evolutionary Chinese Cuisine." What that's all about?
For the "evolutionary" part, I take high-end Western ingredients and cook using more-or-less traditional Chinese techniques. I'll also do the reverse: use Chinese ingredients in a traditional Western preparation. I know both cuisines and respect the soul of both, and I won't cook things that have to be forced to work together. In the end I stick to what tastes good, and I guess modernizing in some sense what Chinese food can be in the city in the process.

So it's different than both high-end Chinese and more traditionalist Chinatown restaurants.
On the high end of things, I've eaten at Shun Lee many times; it's good, classic Chinese food. But I think the city is sort of crying out for another kind of Chinese food. I don't say better, but different. People take a lot of the smaller spots for granted, especially in Chinatown, because there are so many tiny but great take-out spots.

Can you recommend a couple of good Chinatown spots?
Sure- there are some more geared toward Chinese tastes, and others geared toward Chinese-American tastes. There's Hop Kee on Mott Street for really great Cantonese cooking, which is becoming a dying culinary art because of a greater influx of Fuzhou immigrants who have their own style and regional cuisine. Hey Hey restaurant is also good. It's now called Tak Hey but the old sign's still there. There's also New South Wind on Division Street. Their pork chop rice is the best in Chinatown.

I've heard that you cook using, for a lack of a better word, "secret" Chinese cooking techniques.
Let me just give you an example: With Japanese, Thai, and Vietnamese cooking- there are a lot of American and Western chefs that have taken a liking to the styles and ingredients. They're cooking it, but on the other hand, you don't really see American chefs really cooking Chinese food. The reason for this is that the "old men" Chinese chefs keep their recipes secret. I worked for one who used to make his sauces in the walk-in refrigerator during lunch just so nobody could see what he was doing. Basically, it's partly a "they're mine" mentality, but in the community it also means your job. My aunt and uncle owned a small Chinese coffee shop, and my uncle has never given away any of his recipes- they're just secret. He won't even write them down for my aunts, even if they want to cook this stuff at home for themselves.

Why is that?
That's just the way it is. I guess it's along the same lines China had that "closed door" policy in the 20's and the 30's, where they didn't want anyone coming in. It's just sort of the mentality, the culture at the time. When my aunt goes to some of her old, good friends to get some recipes, they first question they invariably ask is "Who's it for?" She has to say it's for herself. One Chinese cook that I worked for took an oath to his teacher, and I think a lot of others do that too.

The format of the menu at Monkey Bar is family style. That's a change.
We combined family style, sharing, and tapas. Tapas is a big word these days, but dim sum might have been the original tapas. Our tapas are middle size, so two people can share each item. Most family style restaurant plates are very large, like Ruby Foos; ours come in at a lower price point.

There seems to be something of a tapas or "small plates" backlash these days. The Times even had that article on "the death of the entrée" a couple months back.
I still like the basis of an entrée- from a chef's point of view- with a protein, starch, vegetable, and sauce: You can have a lot a fun with that, playing with flavors. As far as what the newspaper says, I don't know. Definitely outside the city there are still of lot of huge portions, big entrees. That's just the way people like to eat, and people should try to eat the way they want to eat. From a business point of view, the tapas trend makes sense because it deals with both the astronomical rents in the city and intense competition between places, because tapas keep the price points down.

Walk me through a couple of items on your menu. Steamed Chinese bao buns, liquid foie gras-
These are steamed foie gras buns. The dough is very hard to make, and we make it here from scratch every day. It's also used in the burger buns- we bake it to order. It's the same dough that's used in roast pork bun bao, and outside of Chinatown, 99% of people buy it. Because I want to work with a good product and I wanted to stuff it with foie gras, I had to find a recipe and make the dough myself. The foie gras melts a little bit when it's steamed, and that just heightens the comfort food-level of the bao you'd get in Chinatown.

Char Sui Berkshire roast pork, pineapple jam and crispy ginger-
Take Chinese barbecue. Most people don't understand what Chinese barbecue is until you tell them that it's the stuff that hangs from the windows in Chinatown restaurants, and it has a set of special rules and cooking techniques- everything is prepared differently. My roast pork dish is a pork shoulder, prepared the same exact way roast pork is cooked in Chinatown restaurants. However, we do Kurobuta char siu with Berkshire pork, with crunchy fried ginger and sweet pineapple jam.

Do you have any advice for young cooks?
Youth in general are very gung-ho in kitchens, and when you're cooking in a restaurant you've got to realize that nothing is going to be perfect all the time, and that you've got to work your way through things. With food there's a lot of variables, and you're not going to hit every note every time. The best thing to do is keep your head down and keep going, and those things will come. It's not about yelling. It's about finding out what went wrong and figuring out how to make it better.

Do you have a favorite restaurant in the city?
I've had memorable meals at Daniel and Nobu. I worked with Jean Georges a lot, so I'm partial to his restaurants.

You were part of the opening team at Nobu, too. How do you feel that everyone and their mother have a ripoff of Nobu's miso glazed black cod?
I take particular pride in that dish because when Nobu came to New York, I got hired to be part of the crew he brought with him. I was 26. Basically, one of my first jobs was to clean the fish, then I got to cut the fish, and eventually I was given the whole dish when I worked the line. That was my station. For the first 2 years at Nobu, miso black cod was my responsibility.

So you're that guy [...]
I'm definitely not trying to take any credit away from Nobu because obviously it's his dish, but I probably had some degree of influence on its popularity because I was making it for the first 2 years. I know the ins and outs of it, and it's actually more complicated than it seems, it's not just dunking the fish in the marinade. We do a black cod at Monkey Bar, too, but it's nothing like Nobu's- it's more of a Chinese barbecue style, but the fish reacts the same way.

Favorite subway line?
Are you kidding me? With the status of the subway lines these days, I can't pick one. I take the F train, so let's go with that.

Best spot for an after hours bite?
They close at 2, but the last place I went was Momofuku. I enjoy Dave Chang's use of ingredients; he definitely knows how to handle food. I'll also go to Blue Ribbon in Brooklyn.

A lot of New York chefs are writing cookbooks these days. Due to the fact you cook with a lot of secret recipes, does that mean you can’t really write one?
Bruce Lee tried to teach the west a lot of Chinese secrets, and look what happened to him- Seriously, someday I’d like to write a cookbook. But we’ll have to wait and see what the future holds.