[UPDATE BELOW] If you were hoping yesterday's nightmare Rat Wrap incident was just an elaborate hoax, well, sorry. An employee at the law firm Stroock—where yesterday's appalling discovery was made—confirmed yesterday's sandwich surprise to us last night, explaining that he was there and "heard [his] co-worker scream." Sharing his story via email on condition of anonymity, the witness writes:

My colleague ordered from Seamless and it was delivered to our office. Nobody on the receiving end saw the wrap being prepared. The pictures are 100% real. The victim did not consume any of the wrap. Steve Henderson [The man whotweeted the first photo of the rodent wrap] also works there and was the brave soul who went to look at the wrap after the purchaser thought they saw a rat.

The wrap was brought back to the Chop’t location and the manager took it very seriously and refunded the purchase money. My co-worker was very distressed the rest of the day and called their doctor to see if they needed rabies vaccinations. The founder of Chop’t called and apologized profusely to my co-worker. He expressed that it must have been a disgruntled employee. The victim asked Steve and Julia to take down their tweets because they do not want to think about it or discuss it any more.

Confirming Chop't founder Tony Shure's statement yesterday, the company issued a statement on its website last night apologizing for the incident and explaining their measures to sanitize the restaurant prior to reopening today:

We learned today that a guest reported finding a rodent in one of our sandwiches delivered from our Pine Street location in NYC. Nothing can describe what goes through the minds and hearts of all of us at Chop’t in a moment like this. Our vigilance for delicious and safe food has never wavered since we first opened our doors back in 2001.

All of our restaurants are routinely inspected by the Department of Health in addition to our regular internal inspections. Our most recent Health Department inspection at Pine Street received an A rating. We also engage an independent restaurant sanitation audit company to ensure the quality and cleanliness of every Chop’t.

Although none of the inspections at this location indicated any problems, we immediately took action. Those actions included closing the location temporarily in an abundance of caution in order to conduct a thorough inspection of the entire facility. Also, we have requested an inspection by the NYC Department of Health tomorrow morning in preparation for our reopening.

Every day, every hour, every minute… having served tens of millions of meals to all of you over the last 14 years, we take each individual meal as seriously as the first.

With sincere apologies, Tony and Colin

The Health Department confirmed that Chop't did request an inspection, but could not provide any details about the incident. So far the individual who first discovered the rodent wrap has declined to comment. An employee at the Chop't Pine Street location told us that the shop is now open for business.

And now, let's take a moment to mourn the Little Rat That Could, who will never achieve his lifelong dream of being a chef. At least now he'll be with his people in paradise. 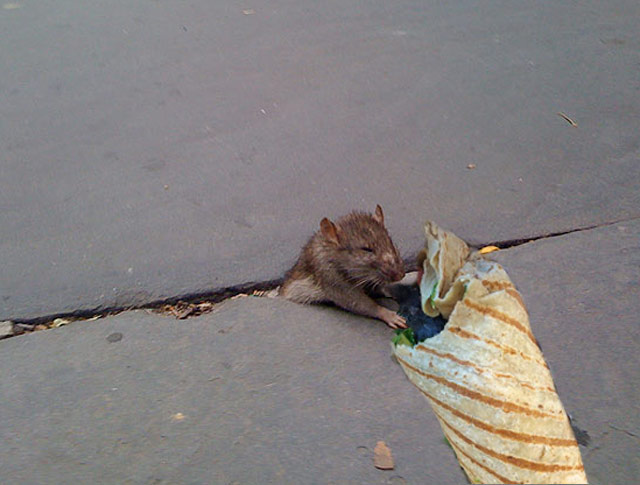 At the request of Chop't management, the New York City Health Department conducted a restaurant inspection at the Company’s Pine Street location earlier today. The restaurant received a 100 score, its highest rating, and on that basis, has reopened for business.

As a result of the fact that the Health Department investigation and the Company’s internal inspection revealed no evidence of any rodent activity whatsoever anywhere in the restaurant, the company is now conducting a thorough investigation to determine the cause of this unfortunate incident.

Reports that a disgruntled employee was involved in this incident are completely false.

With denials about the "disgruntled employee," this leaves the question of how the rodent ended up in the wrap a mystery. The company tells us it's "conducting a thorough investigation to determine the cause of this unfortunate incident."

#chopt
#doh
#ew
#financial district
#mice
#rat wrap
#original
Do you know the scoop? Comment below or Send us a Tip