New York City's first towering Chick-Fil-A has hit a stumbling block in its plans for domination of the city's fast food fried chicken landscape. A Christmas Eve inspection by the Department of Health uncovered a host of critical violations, resulting in 59 violation points, squarely in C territory. On December 30th, the restaurant closed its doors, indicating it would reopen for breakfast on January 4th.

No line outside Chick-fil-A in NYC. Sign says closed for maintenance. Some violations online, no reason for closure pic.twitter.com/1lnuOonvXG

The five critical violations included food held at improper temperatures and food not cooled by an approved method. Filth flies, food not protected from possible contamination and soiled wiping cloths were also cited. A previously ungraded inspection earlier in the month returned with 39 violation points, indicating things got worse—not better—between the two inspections. 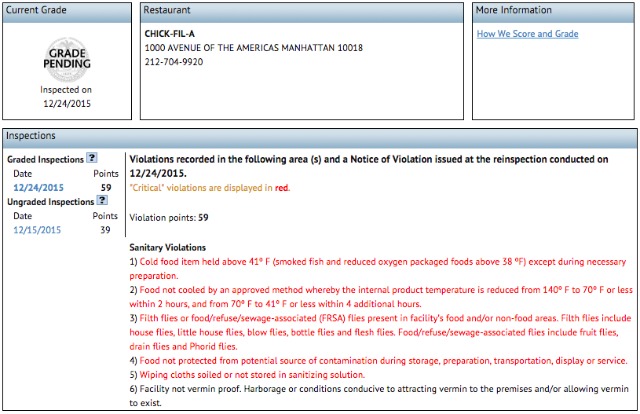 The restaurant itself was not shuttered by the DOH so it appears that management of some kind felt a self-imposed reboot was necessary. Naturally, people are upset about it:

The Chick Fil A in NYC is closed and people are going mad. Mostly me tho.

Chick-fil-a in NYC is closed.... Whyyyyy

#chick-fil-a
#doh
#health department
Do you know the scoop? Comment below or Send us a Tip