Chez Moi, The Most Charming Restaurant On Atlantic Avenue Despite having walked by countless times, I did not notice Chez Moi, with its quaint unassuming storefront, until recently. Located on a bustling block of Atlantic Avenue—one that Floyd, ChipShop, Colonie, Luzzo’s, Red Gravy, and others call home—Chez Moi should not be overlooked, and its insides are just as appealing as its charming exterior. The food, though, is what really shines.

Executive chef Ian Brahmstedt has created a fantastic menu which will please vegetarians, pescetarians, and carnivores alike: there's everything from steak tartare to a hamburger, mussels prepared five ways, a rotating fish dish (served with fresh seasonal sides that don't seem like an afterthought), and risotto that is so light and fluffy it has made me seriously question every other clumpy, heavy risotto dish I've ever consumed. And for $7, the truffle croquettes are a perfect happy hour appetizer—the plate practically overflows with these mouthwatering mushroom creations. 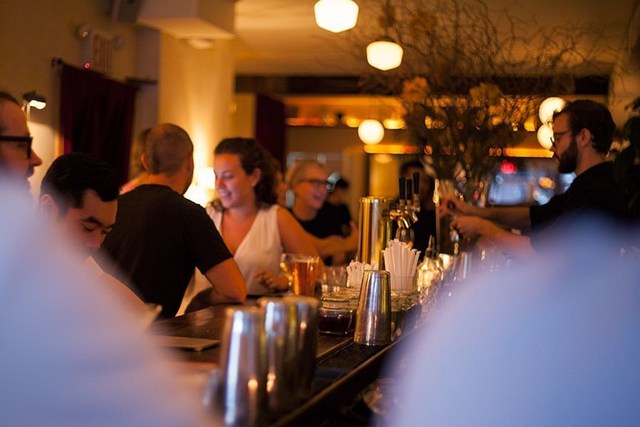 At the bar, there's Jesse Murdock, who has artfully created a unique cocktail menu to compliment their classics (which include an oft difficult to find Aviation!). There's even a Foie Gras cocktail, which features brown butter infused bourbon, topped with an apple slice and generous shavings of foie gras.

The French bistro (which also has a stellar brunch—get the chouquettes!) opened in 2012, thanks to husband and wife team Tarek Debira and Patricia Ageheim. Debira tells us they instantly fell in love with the neighborhood upon moving there five years ago, "and being from the restaurant industry, we felt that it would be the perfect place for a restaurant. Patricia is from Stockholm and I am from Paris, so a cozy cafe concept with great food at an affordable price was the starting point. Our goal with Chez Moi was to provide the neighborhood with a homie French bistro with classics and seasonal dishes, great cocktails and organic wines." And they have succeeded on all fronts, and then some—this little spot is the star of Atlantic Avenue.

While any seat will do, I'll give you a tip: call ahead to reserve the front table. This will practically transport you to Paris, with wooden doors lined with lace opening up on to the street—you'll never want to leave.

#atlantic avenue
#chez moi
#restaurant
#original
Do you know the scoop? Comment below or Send us a Tip