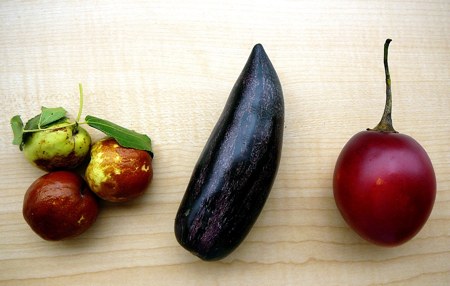 According to Wikipedia (and an unholy number of online gambling sites), the modern slot machine owes a debt to a mechanical device invented in 1880’s Brooklyn by Sittman and Pitt. This original machine had 5 internal spinning barrels, each painted with 10 different card faces. Good cards on the machine meant things like free drinks for bar customers with lucky nickels. Bad cards led only to bar customers loading more money into the machines.

The same Internet sources also note the appearance of fruit on modern slot machine wheels as a later development. Fruit symbols like cherry and melon are said to derive from the Bell-Fruit Gum Company. One particularly apocryphal slot machine story claims that sticks of fruit flavored gum were once dispensed to winners instead of money. That brings us to the fruit pictured here, a sort of postmodern slot machine readout unto itself.

Journeys to outer boroughs produce markets often yield surprising results, like blindly pulling at a one-armed bandit. On the left here are underripe jujubes, or red dates. Not to be confused with the candy of the same name stuck to the undersides of movie theater seats everywhere, the jujube is a small, ping pong ball sized fruit. It turns reddish-ocher and wrinkles when ripening. As this happens, its taste turns from mild and apple-y, to sweet and strong. Green jujubes taste a bit like chewable Vitamin C tablets, albeit ones you could bake a killer pie out of because of their subtle, rosy fragrance. “The jujube's sweet smell is said to make teenagers fall in love,” claims the fruit’s Wikipedia page. No word on whether the only slightly sweet smell of an immature jujube makes immature teenagers fall in love. $1.99/pound at No. 1 Fei Long Market, 4423 8th Avenue (near 45th St.), Brooklyn; also at First Stop Produce, 5803 8th Avenue, Brooklyn (near 58th St.)

In the middle here is a purple pepino melon, looking a lot like eggplant with its dark indigo skin and elongated shape. Cutting open a purple pepino reveals nothing less than fruit that looks exactly like… the inside of an eggplant. Like the rest of its melon family, the purple pepino originally hails from South America- Peru to be exact. This one came with a sticker that said something like “New England Grown- With Pride.” Oddly, this sticker was nowhere to be found when it came time for us to wash and eat the thing. Tastes like a cross between a cucumber and cantaloupe. Not very sweet, and somewhat watery. Fruit with an identity crisis, perhaps leading to this reference to it on a Purdue University page- “The growers consulted say it has disappeared.” Disappeared elsewhere, freely available in Brooklyn. $2.99/piece A Plus Quality Fruits, 424 Ditmas Avenue (near E. 4th St.), Brooklyn

Recent New Zealand-based research has challenged the concept of “food miles,” or the ethical construction of a diet based on how far it has traveled from farm to plate. Perhaps this is part of the reason why tamarillos from Kiwi country have begun to appear in specialty produce markets. Otherwise known as the tree tomato, the tamarillo has dark red flesh, a pumpkin-like stem, plum-colored pulp, and is filled with bitter black seeds. In short, it’s another enigma of a fruit that tastes in turns like cherry tomatoes and persimmon, with a little sour orange thrown into the mix. Good raw, but one chopped tamarillo also makes a nice addition to a root vegetable ragout, among roasted parsnips, parsley and celery root, carrots, some thyme, and potatoes. This is not your parents’ slot machine fruit. $1.99/piece, also at A Plus Quality Fruits, 424 Ditmas Avenue (near E. 4th), Brooklyn

#As
#bar
#brooklyn
#food
#green
#history
#internet
#love
#money
#No\. 1
#smell
#theater
Do you know the scoop? Comment below or Send us a Tip