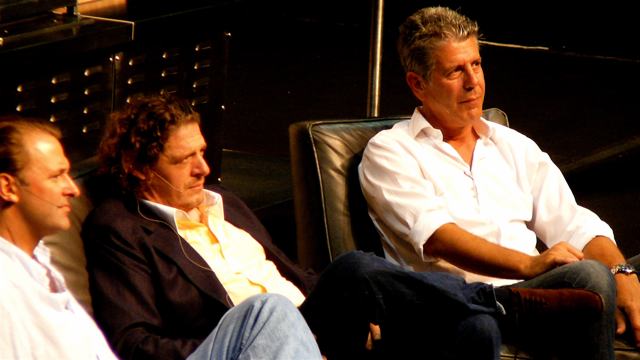 Marco Pierre White (center) and Anthony Bourdain are bored by your questions. Michael Ruhlman is on the left.

“The Role of a Chef” panel which closed out day one of the StarChefs International Chefs Congress at the Park Avenue Armory featured iconoclasts Marco Pierre White and Anthony Bourdain (with writer Michael Ruhlman moderating) dishing about chefs they liked, and some they didn’t. As usual, Anthony Bourdain reserved most of his venom for food television personalities. When the conversation veered toward restaurants, both panel members essentially offered their thoughts on absentee chefs, who ostensibly oversee more restaurants than they can possibly physically cook in every day.

Marco Pierre White cited Pierre Gagnaire and Alain Passard as examples of chefs who are unwaveringly dedicated to the craft. “Passard is a man of nearly 60,” White said, “and he’s still at the stove.” When an audience member asked White about Michelin starred chefs between the ages of 25 and 30 he admired, White said: “There are none. I was 33, and I’m still the youngest.” All this is typical coming from a chef who earlier this year endorsed a line of soups bearing his name by way of saying “I'm not pretending I'm the creator of these soups. Anyone believing that is a fool.”

White is a something of a patron saint for apprentice cooks, and will likely become better known to U.S. audiences later this year when he hosts (what else?) a reality television show called “The Chopping Block.” It will likely air in a competing time slot with whatever Gordon Ramsay show is playing on Fox, as the two chefs have a legendary feud which plays out in British tabloids. During Sunday’s panel, White seemed to be calling Ramsay out for spreading himself too thin throughout his restaurant empire.

That tenor of tabloid-style chef matches seems to be catching on here. In one account of Sunday’s panel, it was reported that White called fellow Michelin-starred chef Alain Ducasse “soulless.” In fact, White called the food at Alain Ducasse’s restaurants “soulless,” not Ducasse the man. Other inaccuracies abound in reports: such as the name of the U.K. television show White took over took over from Gordon Ramsay. It was Hell’s Kitchen, not Kitchen Nightmares.

Toward the end of the panel, the chefs were asked to weigh in on the trend of untraditional restaurants and guerrilla gourmet-style meals, presumably held in musty, George Michael video-esque warehouse spaces. Bourdain ended up professing his admiration for underground dining. “Particularly when you’re talking about bootleg foods,” the chef said, “like illegal cheeses.” He mentioned something about “ortolan parties,” and concluded “then it’s the best thing ever.”