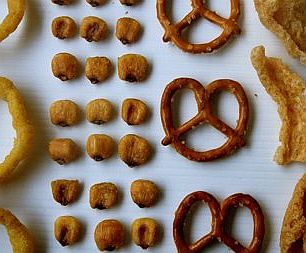 After busy weeks of hype surrounding high profile restaurant openings like Adour and Bar Boulud, which feature a laser projected bar menu and standalone charcuterie kitchen, respectively, it's now time to catch your breath with some chefs who are mixing their concept food with a trace of nostalgia for after-school snack-time. (And opposed to the trendy new kids on the block, you can actually get a table to taste these fun foods.)

At Pamplona, Alex Ureña renders the fat from cooked chorizo and uses it to pop popcorn. It is then sprinkled with a powder made from the ground, cooked chorizo while still warm. Pamplona serves the choriz-jiffypop as a complementary bar snack.

The criminally underrated (and walk-in closet-sized) Grafitti serves a tapas-sized chili shrimp and a curry leaf idli ($15). Intense peppery heat contrasts with the mellow flavors and textures of the rice and shrimp; but then salt and crunch come from an unexpected source- chef Jehangir Mehta separates the dish’s two main components with a buffer of crumbled pretzels.

Small plates crispiness is supplied by old-fashioned potato chips at Degustation. Chef Wesley Genovart has been known to sneak the snack into omelettes and other unlikely places; they’re currently included in the restaurant’s Serrano ham and hamachi crudo.

Giving the ceaseless experimentation that comes out of the wd~50 kitchen, it shouldn’t be much of a surprise that Wylie Dufrense serves some Ferran Adria-esque takes on traditional school lunch snacks. Last year he was seen tinkering at an Experimental Cuisine Collective meeting with a variant of the rarified funyun. Dufresne’s version has 4 ingredients, compared with the puff snack’s litany of preservatives and alphanumeric industrial chemicals.

Fried Hominy is served at both Cookshop ($4) and UWS newcomer Madaleine Mae ($5.95) as a bar snack. Blown up in the fryer and sprinkled with salt, the hominy resembles nothing more than jumbo corn nuts. Consulting chef Jonathan Waxman and chef de cuisine Andrew Curren also offer “Cracklin” Smoked Berkshire Pork Salad for $17.95. Em, that’s pork salad, garnished with pork rinds to you.