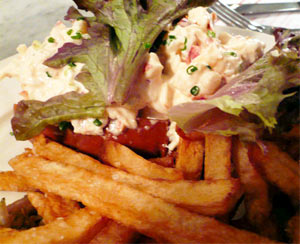 Two chefs of popular seafood restaurants have settled a lawsuit out of court, denying foodies the chance to hear how restaurant plagiarism would be argued. The NY Times reports, "Both sides in the case agreed to keep the terms of the settlement confidential."

Last summer, Pearl Oyster Bar chef and owner Rebecca Charles claimed that her former sous chef Ed McFarland took not only her recipes when he set up shop at Ed's Lobster Bar but design cues, like gray-painted wainscoting and style of bar chairs. The Times visited Ed's on Lafayette Street yesterday, where the wainscoting is now painted white and bar chairs are white (not stained). The menu also included some new dishes (Charles had claimed the menu was virtually identical to Pearl's).

McFarland told the Times he was happy with the settlement and would be opening up more Ed's locations, while Charles said she accepted the settlement because she's taking care of her ailing mother. She said, “I still feel strongly that I did the right thing. I think it’s important to our industry to find some way to help chefs protect what they create.” Maybe she should contact Missy Chase Lapine, who thinks Jessica Seinfeld's cookbook is a little too much like hers.

#chef
#ed's lobster bar
#lobster roll
#pearl oyster bar
#plagiarism
#recipe
Do you know the scoop? Comment below or Send us a Tip