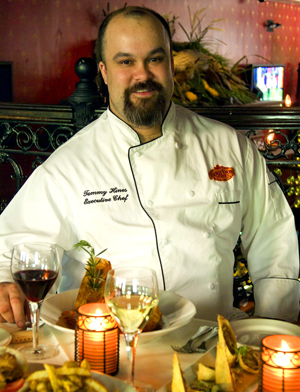 In May a lavishly appointed homage to New Orleans's French Quarter opened in the theater district. Called Bourbon Street Bar & Grille, the two-story restaurant evokes the Big Easy with gas lamps, wrought iron railings, reclaimed stained glass windows, and a massive high-topped bar that dominates the ground floor lounge, where Allen Boyd's classic New Orleans cocktails are served with all fresh ingredients and accompany a casual dining menu. Upstairs, there is an outdoor patio in the back, a spacious formal dining room, and tables on the front patio, which facilitates fun people-watching down on Restaurant Row.

The menu by chef Tommy Hines, a New Orleans native, is authentic all the way down to the ingredients, which he tells us are flown up from New Orleans. His “Buffalo” Alligator has become a big hit; it features marinated strips of alligator in butter milk that he flash fries, then surrounds it with a moat of spicy sauce and blue cheese cream. Hines also does Turtle soup, which he swears is world class. Curious? Bourbon Street Bar & Grille is at 346 West 46th Street. (212) 245-2030.

When did you first realize you wanted to be a chef professionally? I’ve always had a love for cooking. And when I was 19 I went into the restaurant world, but not to cook. I always wanted to make millions doing something else and then go buy a restaurant. But I figured if I was going to own a restaurant one day I should know how it runs. So I just answered an ad for a food runner and started working in the kitchen. And when I watched the passion these guys had who were cooking I realized it could be a great career.

So you never went to culinary school? No, I never had any formal training. Just the school of hard knocks. I got myself in kitchens and surrounded myself with really great chefs.

Did you grow up in New Orleans? Yes.

Were you in New Orleans for Hurricane Katrina? I was. I eventually relocated to Atlanta.

How did it impact you? It was definitely something I wouldn’t want to go through again. I was fortunate in that I didn’t lose anyone. The losses were material; I lost all my stuff from the house I was renting. And the whole situation changed. I was working at the Windsor Court at the time. And the reason I was there was because of the chef and the really intricate food that you would find at five star restaurants like Daniel or Jean Georges. But after Katrina, the whole style of the restaurant changed and it basically became a soup kitchen for FEMA workers. 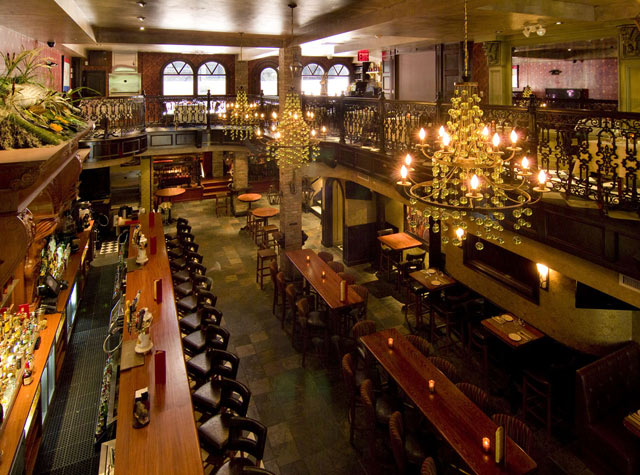 So how did you get involved in opening this restaurant on Restaurant Row in New York City? A friend in Atlanta helped arrange an opportunity to come up here last July. I came up to be a consultant/chef on a restaurant in Long Island City. I kind of used it as my way up here. I always wanted to come to New York; to cook in New York has been a dream. It’s the restaurant capital of the United States. Then I put my resume out there and came across this opportunity on line. I met with the owners, did a tasting, and the rest is history. It’s a great opportunity because I got to build this restaurant from the ground up with them. They gave me full control of the kitchen, the menu, the staff. I designed the kitchen set-up, ordered the pots and pans. It was a great experience.

Is the menu strictly authentic Cajun cooking or have you given it your own twist? I wouldn’t say Cajun; I would say New Orleans cuisine. I pride myself on serving the most authentic New Orleans cuisine in New York City. There is no other restaurant like what we’re going here. I define New Orleans cuisine as the culmination of many, many different styles: Creole Cajun, of course, and also classic French, Spanish, Caribbean, West Indian, African. That’s what makes up the cuisine of New Orleans. And what I wanted to do was to bring the food I grew up eating to New Yorkers.

Is there anything on the menu that people haven’t caught on to that you wish they would try? Turtle soup. I thought the Buffalo Alligoator would turn people off but that’s gotten a great response. But I love turtle soup; it’s one of my favorite things to eat in the entire world. I’ve had it at so many different restaurants; if it’s on the menu I’ll order it just to see what the differences are, because it does vary. For the most part, I think people see turtle soup on the menu and think of their pet turtle they had growing up. I wish they’d try it because I’m very proud of my turtle soup. I would put it up against any turtle soup in the world. I have a cup every day.

How do you get your hands on such unusual ingredients like turtle and alligator in New York? I fly them up from New Orleans. I found a company here in New Jersey that supplies me with a lot of New Orleans products like Louisiana crawfish, Louisiana oysters, catfish, alligator, turtle. It’s all farmed in Louisiana or the Gulf of Mexico. My shrimp and soft shell crab comes from there. I think it’s very imperative; I have to spend more money and I could find cheaper product closer to New York, but it wouldn’t be authentic. I’m getting ingredients from the same sources that supply restaurants in New Orleans.

What’s the company that supplies you? Lagniappe Foods. Lagniappe is actually a slang word we use in New Orleans that means ‘a little bit extra.’ And that’s the theme of my restaurant: big portions. The po’boy is overstuffed so that shrimp are falling out of the sandwich. That’s what we call lagniappe.

What’s your worst kitchen scar? It’s not on the outside, I can tell you that. I’ve gotten way more emotional scars in the kitchen than physical ones.

Can you tell us the worst kitchen meltdown you witnessed or were part of? Oh, my goodness. There are so many things running through my mind, it’s hard to pinpoint one. But when I was in New Orleans at the Windsor Court there was a moment when the chef and I took it further than we should have. I put up a dish that the chef wasn’t happy with for some reason. I questioned him, saying, “What are you talking about? This looks exactly the same as the last fifteen I’ve given you.” He didn’t like me talking back to him and threw the plate at me. I didn’t like him throwing the plate at me and I stepped around the line and stood toe to toe with him. We were about to throw down and one of the sous chefs had to separate us. That’s the closest I’ve come to physical altercation. But I’ve seen a guy get stabbed in the hand before. One lead cook at the first restaurant I worked at would not let anyone touch his knives. The guy working next to him grabbed one of the knives and he said, “Dude, I told you not to touch my knife. You touch it again and that’s it.” The other guy wouldn’t listen and went to grab it again and got stabbed in the hand with a paring knife. That was an interesting one.

What about kitchen hazing? Oh yeah. It’s like pledging a fraternity. “Go to the third floor and get the pound of brick weed!" "Get the pigeon milk!” “Meet me on the roof!" "There’s a party at the pool!” That was when I was a young line cook. But I was fortunate enough to work in restaurants where everyone was very inspiring and helpful and never shooed me away for asking too many questions.

What’s the best compliment you’ve received as a chef? When my parents came up here before I opened the restaurant and my father looked me in the eye and shook my hand and said, “We’re all very proud of you.” And that really meant a lot to me. I have a good relationship with my family but just to see the excitement in his eyes… I respect my father tremendously; he’s the reason I am what I am. His work ethic and his determination and the example that he set – to hear those words come from his mouth was the best compliment I could ask for.