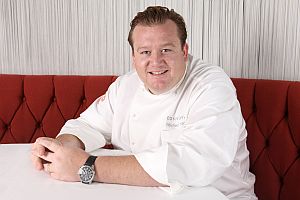 Last month chef Michael White and his business partner Chris Cannon opened Convivio in the space formerly occupied by L'Impero, which White took over after the abrupt departure of chef Scott Conant (who has since opened Scarpetta). Where L'Impero was perceived by some as stuffy and overly formal (Times critic Frank Bruni said it evoked "the upholstered interior of a very large coffin"), Convivio aims for a more casual, though still elegant, atmosphere, with "burnt orange" upholstered banquettes, lacquered ceilings and a copper bar top. (Photo after the jump.)

White's menu emphasizes the cuisine of Southern Italy, with primi selections like Maccheroni, (handmade pasta twists with red shrimp and pesto cetarese) and traditional secondi such as Bistecca all Pizzaiola (grilled flat iron steak, tomato, baby eggplant and capers). The critics have yet to weigh on White's new venture, but Gourmet magazine filed a preliminary rave soon after Convivio opened, calling the pasta "extraordinary" and declaring that "nobody else in New York is cooking these authentic Southern Italian dishes. The menu—4 courses for $59—starts in Rome and moves south. It’s filled with gutsy, flavor-forward food that comes rushing straight at you." Convivio is located at 45 Tudor City Place, (212) 599-5045.

So you've been open as Convivio about a month now, right? We just reached the five week mark.

What's the biggest challenge you've faced? Actually it's been a very smooth transition because we were already introducing some of the dishes on the current menu when it was L’Impero. And we've got a great team here; I'm very lucky to have the same staff as before. It's such a great group of people to work with; we're like a family.

What was your motivation in changing the restaurant from its previous incarnation? L'Impero had been open for years and it already had a very entrenched identity. And I wanted to do something with my own imprint on it. Also, when I took over as chef for L'Impero after Scott Conant, we were reviewed very quickly; it was too soon and I hadn't really had time to make the place my own.

For those who don't know, what are some differences between northern Italian and southern Italian? One difference is that southern Italian is spicier, and you'll find more dairy used further north. Partly because of the warmer climate in the south, the dishes don't usually use butter; olive oil is a huge component in Southern Italian cuisine. In fact, I was looking for butter in the kitchen recently and we don't even have any! 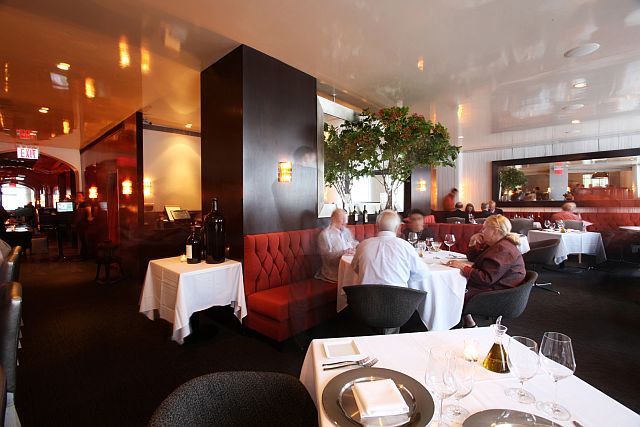 You're from the Midwest, right? Yes, Wisconsin.

What is it about Italian food that appeals to you? When I was younger I got my start at a great Italian restaurant in Chicago; I was just washing and chopping vegetables. But I fell in love with Italian food and saved up my money and went to Italy. I thought I was only going to stay for six months, but I ended going back and forth over the course of seven years. I also met my wife in Italy, so I should admit that it wasn't just about the food, it was also about the Italian women.

Much of what makes the food in Italy so terrific is the freshness of the ingredients. How do you compensate for that in the U.S.? Well, I'm very lucky to be in New York because a lot of Hudson Valley farmers are selling their produce through the big food distributors now. So instead of going to the Greenmarket for everything, I can get a lot of ingredients from the same sources where I get other things. For example, in Italy, when you go shopping you can usually only get the cheese from the particular region where you're shopping. You could order it from another region and have it delivered, but here in New York I can go into a cheese shop and get cheese from all over Italy. In that sense, I actually have access to more variety than a chef in Italy would have. The only things I can't really get as fresh are things like crustaceans. We do serve seafood at Convivio and I can get Alaskan prawns and I could have other seafood shipped from Italy, but that gets very expensive.

And you've lowered the prices a bit at Convivio since the transition from L'Impero. Yes, which is very difficult now with the economy the way it is. For instance, I pay a fuel surcharge on everything we get delivered. For every delivery, at the bottom the receipt, it's three dollars or four dollars. Which doesn't sound like much, but when you're getting sometimes 20 deliveries a day, five or six days a week, it adds up. And the price of wheat has gone up 300%.

What are the most popular items on the menu right now? Definitely the pastas. Of course, an Italian restaurant is defined by its pastas, and we make our pasta in-house.

Was there a particular moment or an epiphany when you realized you wanted to be a professional chef? Not really. And if a young person is convinced they want to be a chef the first thing they need to do is start working in a kitchen and get some experience cooking. Working as a cook and being a chef are very different; being a chef is more about organizing people and planning.

What's next for you? My partner Chris Cannon and I are opening a new restaurant in what was formerly San Domenico on Central Park South, which I'm very excited about. It's such a great area now, with the new park in Columbus Circle and the changes there, and I have a particular fondness for that restaurant, having worked with Valentino Marcattilii at Ristorante San Domenico in Italy. The restaurant will be called Marea and focus on seafood.

Any idea when you'll open that? By the end of March.