by John Del Signore
We've been big fans of the brick oven pizza at Williamsburg's Fornino for years, having co-hosted a series of wild pizza parties at the establishment. So it was with great enthusiasm that we welcomed chef/owner Michael Ayoub back to Park Slope, where he recently opened another Fornino in the exact same space where operated one of his first restaurants back in the '90s. But this is not your grandhipster's Fornino: The menu is expansive, boasting a wide array of antipasti, pasta, and entrées, all under $20. Highlights include the Caramelized Onion Tart with Hudson Valley goat cheese and black olive; the Three Cheese Ravioli; and the Roasted Duck Breast with cherries, white balsamic vinegar and spinach.

And then there's the pizza: Unlike the first Fornino's brick oven Neapolitan pies, the pizza here is grilled. Yes, grilled. This is a radical departure from what put Fornino on the map when it opened back in 2004, and we got Ayoub on the phone last week to grill him about the changes.

I guess the first question is the obvious question, which is why grilled pizza? I started the first Fornino with Neapolitan pizza. You know, been there, done that. As a chef, I try not to continually repeat myself. I like to push the envelope a little. When I did write this menu, it was to create a neighborhood restaurant that would be a place where you could go for dinner frequently. Going out to dinner, to me, is not such a special occasion anymore. I do it fairly often. So I didn't want this to be such a special occasion type of place. I wanted this place to be a neighborhood restaurant.

Grilled pizza isn't new in New York, but it's new to a lot of people. How did you decide to start doing grilled pizza? The grilled pizza, they've been doing it in Italy and actually in Argentina for centuries, you know. This is something that's been done for a very long time, and I've always loved it. Actually, Vinnie Scotto was the first one to introduce me to it, and I fell in love with it. For the last five years I've been teaching a pro-bono course at CCNY on grilled pizza.

And what's their reaction to it? The first question I always get from people doing it on a barbecue is, how come it doesn't fall through the cracks? They can't understand how it goes onto a grill. It actually doesn't go through at all. [Laughs] It's super thin, and when you put it onto the grill, it cooks and you'd be very surprised how long it stays on the grill. It's not an excruciating, high-fire, charcoal grill shooting flames from the bottom of it. It's a medium heat grill, and the dough cooks wonderfully. 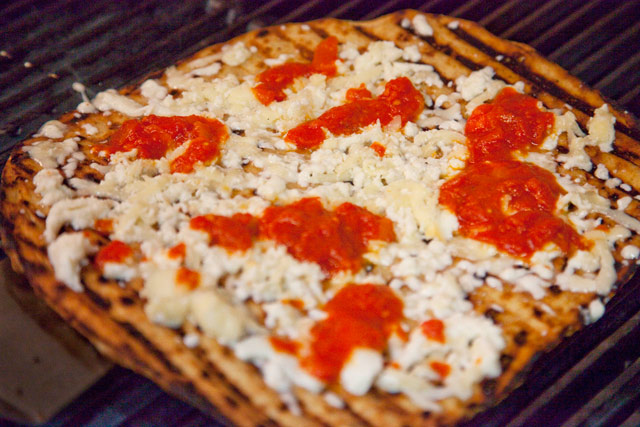 Now there's a lot of other stuff to choose from on this menu. It's huge. What do you recommend? It's like my children, I love them all. But when I write the menu, it's really like the way how I like to eat. Nothing on the menu is a huge portion, and the menu is not set up like appetizer and entrée. So you can have, there's quite a large selection of antipasto, a large selection of pizzas, a large selection of pastas, and some odd items. The combinations of the mix and match is successful. One night I would have more serious dinner, maybe I would have antipasto and a steak. Another night I would have antipasto and maybe a salad. Maybe I'll just have a pizza and a glass of water one night. The idea was that there would be much more availability for a diner to create their own dining experience, as opposed to going into a restaurant where there are eight appetizers and eight entrées.

Was it a tough finding a team for the kitchen who could handle that kind of versatility? It's always a challenge finding people that know how to cook. We put so much into the idea these days that chefs are celebrities now, so a lot of people are under this misconception that they're going to probably be the next Iron Chef, or Food Network star, or the next Emeril Lagasse. Cooking isn't something where you just read the words on a page, and study, and know all the recipes. Cooking comes from the heart. You gotta be born with that. I could teach you all the recipes in the world, but just think about it, there's thousands and thousands of cookbooks out there. How many four-star chefs are there? Cooking has to come from the heart—it's a passion and you're either born with it or you don't have it. So it's really frustrating looking for people with passion.

How did you get into cooking and where are you from originally? There's pictures of me before even my modern memory when I was two years old, rolling cookies with one of my aunts, always in the kitchen with my grandmother. I started professionally cooking at 13, you know, once you were able to get working papers. I was working in the deli. My next door neighbor was in the business. By the time I was 17, doing summer jobs, I was working out in Sag Harbor, and I was the sous chef at one of these very large places where we probably invented the rubber chicken and seafood combo. But at one point I became the chef there, after a couple of years. Cooking was never really meant to be my profession. I was going to school to be a veterinarian at the time and how I got into the restaurant business is, I was the chef of a very popular restaurant and the owners were fighting. I was 20 years old, and when one of the owners said they wanted this other restaurant, I said I would buy it. I came back with a lawyer and $5,000, and bought half the restaurant and half the building in 1977.

And where was this? The restaurant was Skaffles. 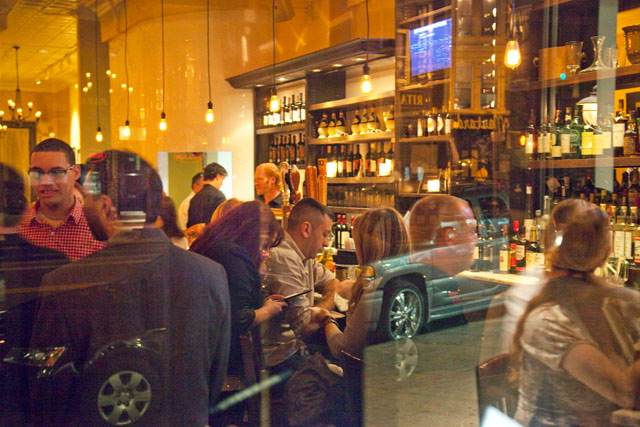 So you're from Brooklyn originally? Yeah. I was Brooklyn before Brooklyn was cool.

So how did you settle on the location of Williamsburg? I went to this place called Planet Thailand about seven years ago, and I remember going there and it was a Monday night at nine o'clock, Monday night being when chefs go to eat. And we got there and at nine o'clock, at a 10,000 square-foot restaurant, I had to wait an hour. I said I can't believe this. Something's going on with this neighborhood. It took me about a year to find my space. It took me another four months to build it up, and I opened Fornino in Williamsburg in October of '04.

And now, Planet Thailand is closed, and you're still there. I'm still there. [Laughs] Williamsburg is a very distinct interesting area. I often tell people if you have a tattoo or piercing, you probably have to show your passport. When I ride on the L train—I'm over 50 years old—people just look at me and figure I'm lost. [Laughs]

So how is it doing in Williamsburg? Williamsburg is fantastic. Every year we do a little better than the year before. We have a very loyal following. Pizza has almost a cult following. If you open a Chicken Parmesan place, I don't think you'd have such a cult following as pizza does. Pizza's the great common denominator of people. Everybody is satisfied by pizza.

There's been a huge sort of boom in what you might call upscale pizza restaurants, which started long after you opened. It actually was long after me, and I kind of feel that I helped start it all, with all this new and improved artisanal pizza. Still to this day—I'm not trying to be pompous, but there's been no chef of my caliber that has gone into the pizza game. Pizza has become a very serious game in New York.

Have you checked out the pizzas at any of these new places that have opened up that have gotten so much attention? I've eaten at every one of them.

What are your favorites? Mine. I say mine because these newer places would be, they always quote it in the Times, about this new "authentic, authentic, authentic." The only thing they haven't brought in is polluted Bay of Naples water. I particularly prefer my style, which is a little bit of a combination of that authentic Neapolitan style, but it's a little more crispy, a little more the American style. The classic form of Neapolitan pizza would enable you to fold it, which is how you would eat it in the street in Naples. You would be able to fold it in four, and it's not supposed to crack. Currently that is not my favorite pizza. My pizza I like a little crisper, I like the bottom to be thinner, and I don't like it to be so doughy.

#fornino
#grilled pizza
#interview
#park slope
Do you know the scoop? Send us a Tip