by John Del Signore
After earning the adoration of the hipster masses with his killer Neapolitan-style pizza, Belgian-born chef Mathieu Palombino has recently opened his second Motorino location across the river in Manhattan. The East Village spot (49 East 12th Street) is cozy compared to the spacious original, but what it lacks in size it makes up for in charm and legend: It's the former home of beloved Una Pizza Napoletana, and with the lease Palombino got his hands on the restaurant's prized Acunto wood-burning oven, handcrafted in Naples.

After only a few weeks in business, the unpretentious yet meticulous pizzeria (which does not take reservations) is already slamming, and on a recent Thursday there was a 45 minute wait for a table. It's worth sticking around, however, and not just for Palombino's soft and succulent pies; the appetizer of Imported Octopus “Conserva” with fingerling potatoes and olive oil ($14) is something you absolutely must get your tentacles on. Earlier this week Palombino spoke with us about that fancy oven, his future expansion plans, and his passion for pizza.

Obvious question, but what's behind the name "Motorino"? Motorino is, in Italian, a word for "scooter." It's an extension of the word "Motori," which means motor. It's a little motor, little engine, which is what they use for "cool."

What's the difference between the pizza at your new restaurant and the one in Williamsburg? Is the Una Pizza Napolitana oven making the pizza different? The oven does not make the pizza different. The oven in Manhattan is just easier to work with. It's like a good car, it drives very well. It's very well made, it doesn't fluctuate too much in temperature, it's an oven that works very well. My oven in Brooklyn is much, much bigger and requires much more attention, many more tune ups all through the night.

Do you have any feedback from customers who used to go there when it was the other place, Una Pizza Napolitana? Yes. I'm sure there's someone out there who doesn't like it who wouldn't tell me, but all I've heard is that they love the pizza and they love the ambiance even more. Some people told me that the pizza itself was better. Now, I don't know about that. Are they saying that to make me happy? I don't know. I trust my own judgment. I appreciate when people tell me they like it better. To my own criteria, I think the new pizza is definitely as good. I won't say it's better, but I feel very comfortable with the pizza I developed and I am not an easy person to satisfy. I'm not very nice with myself. But I'm going to say I feel pretty comfortable with what I do. I'm not going to say that it's the only way in the world to do dough, or that my pizza is the best in the world, because it would be stupid to say such a thing like this. But I feel confident with my dough, with my crust, with my pizza. 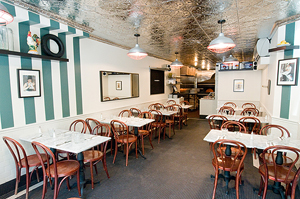 Daniel Krieger
And what is your history with pizza? Is it something that you've always worked with and wanted to focus on? I've always loved pizza, just like you, like everybody else I guess. But I never thought that I was going to be making pizza one day. I worked in French restaurants my whole life, here in New York. I worked at BLT Fish, but that had nothing to do with pizza. When it came time for me to start my own business, I was observing very carefully what kind of business I felt comfortable with. My wife was pregnant at the time, and I was ready to do something but I wanted to think very hard about it. And I always knew that pizza was an amazing product, was a solid product, and it was everything I wanted at the time. I wanted to make something that was very good, something that I knew people would react well to, and I wanted to take it at my level and make pizza that was amazing.

With the pizza oven, there is the speed of it, the accessibility in terms of money for customers, it was a winner. That was very apparent for a guy like me. And I knew I would love it because I knew that making a good pizza was going to be difficult, and making an exceptional pizza was going to be exceptionally difficult. And I kind of liked that. I kind of liked the challenge.

What was the biggest challenge? The biggest challenge was to make a pizza that was better than anyone else's. Having this goal, having this crust and making it into what I like, the dough, was technically the most difficult part. But I'm very comfortable with it; I'm very familiar with mixing ingredients, and I know the family of flavors really well. I know that Brussels Sprouts go well with smoked meats. I know the cheeses, I know how to pair things, and I knew I could come up with pizza that was going to be interesting and taste very good and also be slightly different without being like, extravagant or too plateful. That was not the goal. But it's a very good canvass for things, for flavor and stuff. You can do anything you want.

Is that why you wanted to do Neapolitan pizza? I thought about the pizza, and when it comes to pizza, no matter what anyone says, pizza is Napoli. It's where it originated, it's where it's from. There is a culture behind it. Some people try to reinvent, but there is nothing to invent. This pizza is beautiful. And I also love the cultural aspect of the product.

Do you have plans to expand anywhere else? I don't know. I would definitely do a restaurant. The team I work with is getting bigger and stronger. And you know, we're definitely going to move on and keep moving, but we're going to do as much as we can and we're not in a hurry. Nobody is in a hurry. Everybody's young, but I definitely have a project and an idea I've been keeping in my pocket for years, and things that I know I would love, and people would love. And when it's the time to do it, I'll do it. Right now I'm worrying about these two pizzerias.

Oh well. Speaking of beer, it's taken a really long time for the Williamsburg location to get a liquor license, but it seems like in the East Village you got the license pretty quickly. What was the difference there? The reason why is that in the Village it was a transfer of an existing license. We tried to get it from scratch in Williamsburg.

Are you worried about becoming too popular? On Thursday night there was a pretty long wait for Motorino hopefuls. The way we did Motorino in the city is that we have a much smaller appetizer section, a much smaller pizza section. Because I was very well aware that we had too little seats, and Manhattan is a big city. And there were a lot of people interested. We can turn tables quite fast without cutting into the simple experience that Motorino is supposed to deliver. Meaning you can have your appetizer, your drinks and your pizza and your dessert in a very well staged manner, in a very comfortable manner, without being rushed. But it's a short experience. You're not looking to spend three hours sitting at Motorino, no. It should never be more than half an hour, 45 minutes wait to get there. Which is less than many other New York restaurants.

Besides the pizza, what else on the menu do you particularly recommend? I love the subtleness of the octopus salad that we serve. It's not like the sopressata that's very strong in flavor. It's more of a subtle dish. You cannot blame the octopus for not having as strong of a flavor as sopressata, but I like it. It's sweet and soft, it's aromatic, and it's what you eat in Italy. Every time I go to Italy, I don't think there is a day when I don't eat this. It's a salad you can find everywhere. I love it. It's so good.