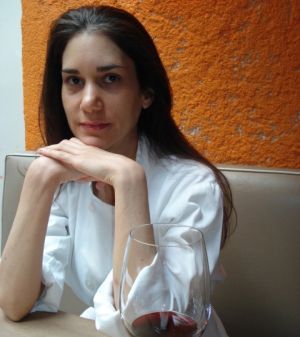 Starting tonight (Cinco de Mayo) and continuing through Friday, Crema Restaurante will be offering a special five course prix fixe menu, with tequila drink pairings, that dovetails Mexican and French cuisines. Chef Julieta Ballesteros, from Monterrey, Mexico, calls the menu a “peace offering” of sorts to the French, and most of the dishes draw heavily upon her training at New York's French Culinary Institute. Even if you're not up for dinner, you might want to swing by Crema to sip some of their specialty French-Mex cocktails at the bar, like The Au Pear: White Rioja Sangria with Poire Williams Brandy. In this interview Ballesteros tells us about her twist on Cinco de Mayo dinner, her preferred hangover remedy and her worst kitchen injury.

Tell us about your Cinco de Mayo celebration this year. We are doing Cinco de Mayo with a French twist: an entire week of French inspired food and drinks that will begin today and end Friday May 9th. Think Foie Gras Enchiladas with a Cassis Margarita or Pomme Frites with huitlacoche (mexican truffle) aioli and a snifter of Milagro Select Barrel Reserve Reposado. Even the music will go from Mariachi to Can Can and Edith Piaf to La Lupe.

Why French? Cinco de Mayo commemorates the victory of Mexican forces over the French in the Battle of Puebla in 1862. But between 1864 and 1867, Mexico was ruled by the former Austrian archduke Ferdinand Maximilian who left behind a French culinary stamp before his tragic end. So I thought that I would refer to Cinco de Mayo in a historic way. All food has historic ties and besides, I trained at The French Culinary Institute, and often refer to many French techniques in my food and presentation, so it was a natural match.

What mix of Mexican and French cuisine is the most appealing to you? The cheeses and the great sauces.

How about a French-inflected Cinco de Mayo drink recipe for our readers? You can't go wrong with a Classic Margarita with French flair. You should steep some organic French Lavander in Cointreau for a few days and add it to your favorite margarita recipe. The aroma is amazing, but use a light hand.

Do you have a good hangover cure? Well, a classic hangover dish in Mexico would be Chilaquiles and beer. It’s a baked tortilla casserole that is very spicy. We make a great one, though there are many versions. Our version comes with shredded chicken breast, flavored with green and red salsa, Chihuahua cheese, crema, red onions, and fresh cilantro; all topped with poached eggs. People come all over to have them at our brunch. I wonder what that says about our brunch customers! 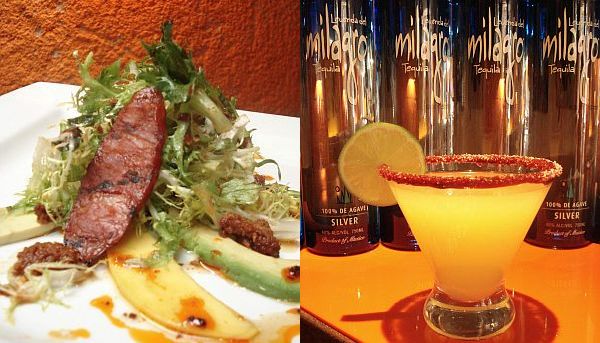 In some places – and at Crema – you’re celebrating Cinco de Mayo for five days. But they don’t do that in Mexico. Why is the holiday a bigger deal here? Well this year it falls on a Monday and we really wanted to focus on our food and tequila pairings. A huge one day party wouldn’t allow us to do that. So we thought that we should spread it out and make our dishes the best they can be. Milagro was kind enough to supply the tequila, which we are making all these infusions from. One of them I call the tequila au poivre. It’s a black pepper infused tequila that I am going to pair with my version of frisee aux lardoons salad; I am using Mexican chorizo of course.

How does the food from Monterey (where you’re from) differ from Puebla (where Cinco de Mayo originated)? Well in Monterey the food is richer and revolves more around meat, and in Puebla it is more homey and mole driven. I do love the moles in Puebla.

You seem to have a thing for tasting menus, like the New Year’s Eve menu inspired by Frida Kahlo. What’s that about? Well as a chef you always try to explore new things . A lot of people didn’t realize that Kahlo was a great cook. I wanted to celebrate that, and I also like to look to new directions and expand perceptions of what Mexican food is like. And plus it’s all about the journey and finding new ways of being creative.

What’s the story behind your worst kitchen scar? I actually had to get ten stitches at my old restaurant going into the basement to do inventory. The trap door smashed me in the forehead. You can say inventory almost killed me!

What’s the best compliment you’ve received as a chef? When people come visit me several times in one week and say they have never tasted Mexican food like this, I am very humbled by that.