Chef Gerardo Gonzalez Soars At The Brand-New Lalo In Chinatown Our latest installment of Quick Bites brings us to Chinatown for trendy SoCal cuisine inside a former karaoke dive bar.

THE VIBE
Last year chef Gerardo Gonzalez turned a cramped coffee shop on Rivington Street into a destination dining spot, somehow whipping up excellent California-ish cuisine in a space so small and modestly-equipped that it couldn't even really be called a kitchen.

I really liked El Rey under Gonzalez, and ate there as often as my eating schedule allowed, but the somewhat repetitive menu also made me wonder what this talented and creative chef might do in a "real" restaurant.

Ah, well, wonder no more. Introducing the brand-new Lalo, an expansive (relatively) and inviting space that gives Gonzalez plenty of room to stretch and grow.

Lalo stands on hallowed ground for sloppy drinkers and terrible singers, and the triggering, decrepit facade remains unchanged from when Winnie's, the much-missed karaoke/dive bar, played host here for nearly 30 years. Once you step inside, however, it's a whole new world. 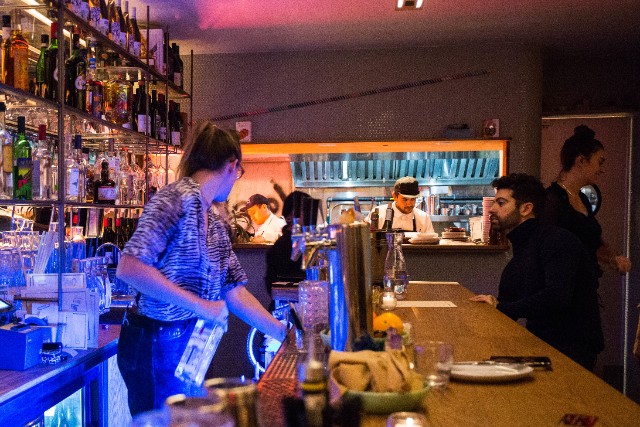 Lalo is attractive and comfortable, with warm tones, grown-up seating, and slightly retro styling. The artwork is tasteful and low-key, though El Rey regulars may miss the shrine to Sade, which was always a good conversation starter. Speaking of speaking, even as the tables filled up last Friday night, and classic disco played loud enough to facilitate shaking it in your seat, you could still chat in a fairly normal-voiced way with your dining companion.

THE BITES
Gonzalez hasn't changed his overall style, and the Lalo menu features a few slightly revamped versions of his El Rey hits, including the Vegan Chicharrones. You'll find that dish in the Starters section, but may I suggest the Chili Strawberries with Rose Peanuts instead? The unassuming presentation here—it's just a small bowl with a bit of the former sitting next to a bit more of the latter—belies the huge flavors and giddy pleasure it brings. Sweet, spicy, sour, candied, crunchy, chewy: this a fantastic play on a PB&J, and I couldn't stop shoveling the stuff into my mouth.

Also addictive right up front are Shishitos en Nogada—a riff on the Mexican dish chiles en nogada—with the blistered peppers topped with crushed walnuts, a rich crema, and pomegranate seeds. It's also the spiciest thing on the menu (so far), and it took me and my companion almost the whole dish to figure out where all the fire was coming from. (It was [SPOILER] the pomegranate seeds!)

Spend as much time as possible with Gonzalez's vegetables and salads. A concoction starring Green Mole and Bulgarian Feta is hearty and complex, the variety of textures and flavors—roasted radicchio one of many individual highlights—complementing each other with ease. And not in a million years would I have predicted that something called Toasted Kasha Salad would be my single favorite dish here, but the combination of buttery bowtie pasta, earthy raw mushrooms, crackling grains, hits of lemon, and pungent goat's milk gouda makes this a big winner. 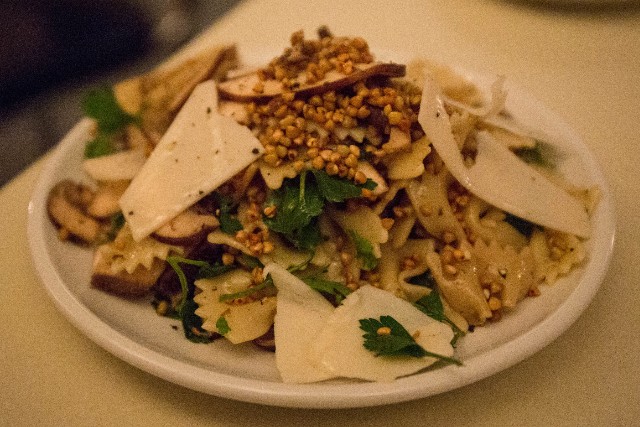 Under Meats, get the Baby Steak, which seems a little silly—a 3.5 oz strip, what's the point?—but it's perfectly cooked and wonderfully satisfying, the tangy dry-aged beef slick with chili oil and crunchy with hazelnuts. The Carnitas are a bit more ho-hum—I like more fat on my pig—but the zippy white sauce and crisp corn nuts manage to keep the party going.

There are Mariscos at Lalo as well. The Charred Octopus is delicious and melt-in-your-mouth tender—the hominy is responsible for dish's heartiness—which makes me believe that the rubbery shellfish undermining an otherwise intoxicating Coconut Clam and Sable Chowder were an opening night error rather than a long-term concern.

And get dessert! Lexie Smith is Lalo's baker, and her Plantain Cream Pie, complete with Maria cookie crust, goat milk custard, and dulce de leche, was a warm, gooey delight.

THE VERDICT
Lalo is a major step forward for Gonzalez, and he pulls it off with aplomb. This place is terrific. And given its cool-kid location, cozy/comfy atmosphere, and still-of-the-moment SoCal cuisine, it's likely going to be slammed all winter.

#Chinatown
#gerardo gonzalez
#lalo
#quick bites
#original
Do you know the scoop? Comment below or Send us a Tip