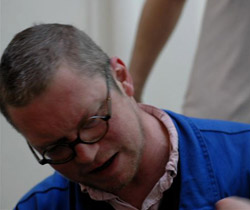 Last night, for the second year in a row, visiting English chef Fergus Henderson (pictured) returned to The Spotted Pig to cook with chef April Bloomfield. The event was dubbed 'FergusStock.' Chefs and cooks from all over attended: in one corner, Tom Colicchio sat with his family and Ken Friedman, one of The Spotted Pig's principal owners. The bar was crowded (more than usual) with prospective diners angling for dinner spots.

Henderson's London restaurant St. John is known for its meat market food: a lot of pig parts, lamb's kidneys, tripe, and tongues of all kinds pressed into terrines, slow cooked and served with dandelion green salad, or chopped and spread on toast. The chef's two cookbooks are considered cult classics. Among Henderson's most vocal supporters is Anthony Bourdain, who explains his influence thus: "Every time you see pork belly or bone marrow, kidneys, or trotters on an American menu, you might well owe a debt of thanks to Fergus. He showed so many of us the way."

Thank you, Fergus. Last night he served us tiny jars of pickled beets and onions, thin slices of pressed pig ear with cornichons, crispy sweetbreads on roasted red peppers, and his popular roasted bone marrow with grilled toast and parsley salad. In a show of something special that never really happens in New York, diners shared their roast pig's heads for two and fried rabbit with neighboring tables.

When asked for his own impressions of New York restaurants where he's eaten in the past few days, Henderson sighed. "Oh, there have been so many. But right now I can only remember 15 East. It was a night filled with uni and sake. Yum yum." And there's no rest for the offal, either: Tonight from 5 p.m. to 2 a.m., Henderson concludes his two kitchen guest chef tour behind the line at Momofuku Noodle Bar, where pork belly began for a lot of people. You can still get in for tonight; full menu here.