by Jen Carlson
Over the weekend we mentioned

that chef Daniel Angerer, owner of Klee Brasserie, was offering up what he calls Mother's Milk Cheese. In other word's, he's been making cheese plates from his wife's lactating breasts. He posted the recipe on his website and also said, "whoever wants to try it is welcome to try it as long as supply lasts." However, it now seems he's shying away from that offer after the Health Department gave him a ring.

In a conversation with 1010Wins, Angerer declares the cheese is not sold in his restaurant; they report that "he believes another blogger misquoted his post and rumors spread that the cheese was available to the public." Well, his website does still invite people to try it! Are they going to come over to his house? In his chat with the DoH he recalls they "said that I can't sell any mother's milk cheese or produce it in a restaurant. I said what's the worry, I don't even do that!" And that's not all, he also says the thought of someone else eating the cheese never crossed his mind, saying, "Do you want to have your wife's milk eaten by somebody else, no not really!" But... but... 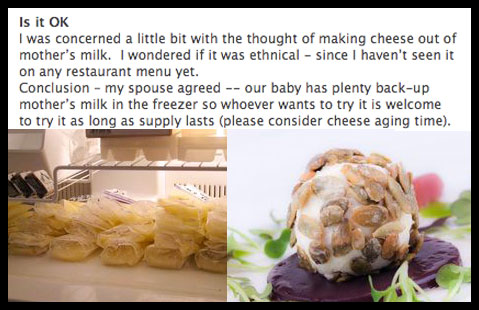 We've contacted the Health Department and they told us they have spoken with the restaurant and Angerer "knows that cheese made from breast milk is not for public consumption, whether sold or given away. While breast milk is healthy, we recommend it for infants, and any experiments with it as a food ingredient are best left for the home." There is no specific language around breast milk for public consumption in the City’s Health Code, but they tell us "Mother’s milk is a 'tissue' per Public Health Law 4360(10)." Their exact language is after the jump.

Would you try the cheese? Hoda and Kathie Lee wouldn't touch it on the Today Show this morning!

2505. Human breast milk; collection, storage and distribution; general powers of the commissioner. The commissioner is hereby empowered to:
(a) adopt regulations and guidelines including, but not limited to donor standards, methods of collection, and standards for storage, and distribution of human breast milk;
(b) conduct educational activities to inform the public and health care providers of the availability of human breast milk for infants determined to require such milk and to inform potential donors of the opportunities for proper donation; (c) establish rules and regulations to effectuate the provisions of this section.

#breast milk
#cheese
#daniel angerer
#klee
#mother's milk cheese
#restaurant
Do you know the scoop? Comment below or Send us a Tip