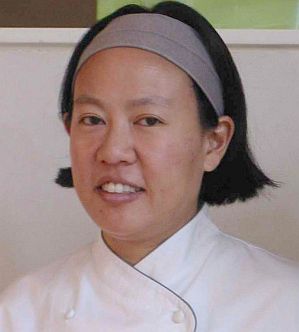 After undergraduate studies in French Literature at Columbia, Michigan-born chef Anita Lo found herself unable to resist the call of the kitchen, and relocated to France to study at the esteemed Ritz-Escoffier school. Graduating first in her class, Lo soon got her start in New York in the kitchen of David Bouley. Eight years ago she struck out on her own with the Greenwich Village favorite Annisa, which serves contemporary American cuisine with accents from Southeast Asia and the Mediterranean. Critical acclaim followed, Crain's named her as one of the top 100 influential women in New York business, and she schooled Mario Batali on Iron Chef. Lo's latest move is the promising West Village restaurant Bar Q, where she's focusing on creative Asian-style barbecue, as well as a raw bar.

You recently opened Bar Q, and then it almost burned down, didn’t it? We had a big fire in the back covered atrium, yes. My back yard is kind of fried. But the interior of the restaurant was okay, for the most part. There was some water damage from when the fire department came.

Do you suspect foul play from another rival chef? No. I hope not.

What caused the fire? Inconclusive. I don’t know. I can’t really comment on that right now.

But you’re open again now right? Well, I’m open inside but I’m not open in the back yard. It’s just too ugly.

Other than that how are things going? Good, I think. So far we’ve done pretty well and I’m happy with the food and the consistency. Every day gets a little better. We’re still a young restaurant and ironing some things out.

What was the inspiration for the restaurant? I’ve wanted to do this for a really long time. Back in the ‘90s I was a chef in a Korean-owned restaurant called Mirezi. Prior to that I went to cooking school in Seoul. And there is a lot of Korean barbecue, so that’s probably where it started. Then I guess in early 2000 all these barbecue places started to pop up and I thought it would be fun to do a different take on it.

What’s the most popular dish on the menu so far? Right now – and it’s only been something like two weeks – it’s the stuffed spare ribs. It has a little Thai basil salad with it.

Is there anything you’re doing with the raw bar that would surprise someone who’s only had sushi? Yeah, it’s not a sushi bar; it’s a raw bar where you can get sashimi. What’s different is that everything that comes out has a condiment tray with like four different kinds of sauces. It’s more fun; you can mix and match. I do have Wagyu on the sashimi menu, that incredible beef from Japan which, if I wanted to, I could find out what the name of the cow was. [Laughs.] And that’s just delicious raw; we do sort of heat it up with a blowtorch so it’s not congealed fat. In the winter I’d love to have some monkfish liver, maybe some calf liver. I know that may not sell well but it’s interesting in my opinion.

When did you decide you wanted to be a chef professionally? 1987, I think. I’ve always been interested in food but when I was a French major at Columbia I went to Paris a couple of times and ended up going to culinary school there. It seemed like a great way to keep up my language and work with my hands, which is something I love to do.

Now you run two restaurants and you’re involved in the dumpling enterprise. Do you sometimes think that everything involved in operating a restaurant is keeping you from actually cooking? Not really. I set up this menu, I trained everybody on what I expect from the food. I’m changing into the spring menu at Annisa and that’s all me; I’m doing a new quail dish today. I do like to have a varied life, too. I’m interested in the business end as much as shopping and cooking. I even enjoy a little paperwork as well.

What do you like to cook when you’re home and relaxing, if that ever happens? Yeah, it’s not happening anytime soon. But I have a house on Long Island and I love to cook things from my garden. I also fish and collect shellfish and love to live off the land on some level out there in the summertime.

Do you have any scars? Yeah, of course. All chefs have scars. They’re fading though.

What’s the worst one? I did Mother’s Day at the Sign of the Dove and we did service from 11:30 in the morning to nine at night and didn’t take a single break. I burned myself twice on my left arm and you can still see a bit of it.

Was it hard for you as a woman to prove yourself in the sort of macho kitchen environment? Yeah, I think in any industry you’re going to run into problems like that. Some of these French kitchens – I’m not sure what they’re like now but back in the day they were really macho and really insecure and really competitive. You know, I’ve had instances where I was sexually harassed; those were pretty much taken care of. It’s certainly not easy. But on some level you get more attention because you are unique; you’re one of the few. It’s so complicated.

I worked for this catering company before I opened Annisa and I was surrounded by a bunch of really macho boys. And it was a terrible catering company even by catering standards. They had me making roast beef sandwiches on cheap store-bought rolls and the only thing they put on it was a little bit of mustard. And I had three different guys come over and correct me on the right way to put these sandwiches together. [Laughs.] I think they were just a little threatened by me because I had already been a chef.

Another recently opened restaurant is Momofuku Ko. Have you been yet? No, it’s impossible to get into. I’d like to go, it sounds fabulous.

Yeah, I think he said he’d consider seating a fellow chef so I wondered if maybe you were one of the few who’d been. Oh really? He said that? I don’t know; maybe I should call him then. I don’t really like to be so forward but I would love to eat there. A friend of mine has been trying to get us in but it’s been really hard.

You probably don’t have much time to eat out, but what are some restaurants you like to hit when you can? I love Momofuku Ssam, I love Il Buco. I’ve been to Dell’Anima recently; they’ve got really good pasta. I eat a lot of sushi. I love A Voce.

When do you expect your garden to reopen? I don’t know. We have to rebuild it. I have no idea. I can’t speculate. It’s up to my contractor. They told me the restaurant would open in October and we opened in April so even if they told me three weeks from now I would probably double it.