Our latest Quick Bites brings us to a garage in Brooklyn filled with grilled cheese.

THE VIBE
If your New Year's resolutions involve eating more grilled cheese sandwiches in 2016, Williamsburg's Fromage Garage has arrived just in time. Opened a couple of weeks ago by the impressively enthusiastic Eddy Fontana (he used to work at Rosarito Fish Shack, among others places), this Metropolitan Avenue spot serves ten pre-set varieties of lactose sandos, and enough build-your-own ingredient options to keep you creating for months. And all of this cheese melting happens in a room that's been tricked-out in full 1950s auto-body-garage decor, an homage to Fontana's mechanic father, whose photo hangs in the bathroom.

When you enter Fromage Garage the first thing that hits you is the place smells like tires. The second thing is Fontana's warm greeting. He clearly loves his Fromage Garage, and the depth of decor detail and vigorous hospitality is more than enough to convince you that this is by no means a gimmicky money grab. As Fontana said several times over three visits, "hospitality to me means: 'This is my home. Welcome.'" 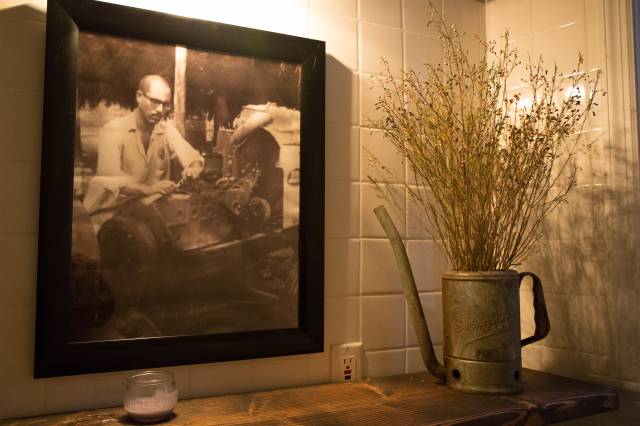 Fromage Garage is a counter service joint: order in the back, grab an available table, and Fontana will deliver your sandwiches on a metal cafeteria tray. Keeping with the "nostalgic gas station" ambiance, the music is a '50s greaser mix which, to be honest, wears more than a little thin after about 15 minutes. And don't expect to walk into a bustling hotspot just yet—pedestrian traffic is light on this side of Metropolitan right near the BQE, and the restaurant was nearly empty every time I stopped in. Fontana's excitement seems undiminished, however, and he's convinced that things will pick up after the holidays when the neighborhood discovers this melted-cheese haven oozing in their midst.

Given the high-quality grilled sandwiches Fontana is slinging, he just might be right.

THE BITES
I ate five Fromage Garage creations over the last couple of weeks, and enjoyed every one. The basic build-your-own involves choosing from among five breads (all baked in house; the rye is really good), six cheeses (plus Daiya, a vegan option), and nine flavored "buttas." You can then go as crazy as you like with add-ons, including a half dozen meat options, the best of which is an excellent roast pork, which I paired with cheddar on rye—I highly recommend you do the same.

My trio of Fontana's custom builds were also all smartly conceived, carefully constructed, thoroughly satisfying. The Speedy Ticket was a rare manchego melt with chickpeas and avocado on multi-grain for that pseudo-healthy California feel; the Turbo Charge is a gouda/mozzarella mix with mushrooms, fresh spinach, and a decent roast turkey; and the Nacho-Daddy Cadillac a crowd-pleaser with cheddar, crisp bacon, black beans and olives on Sourdough. 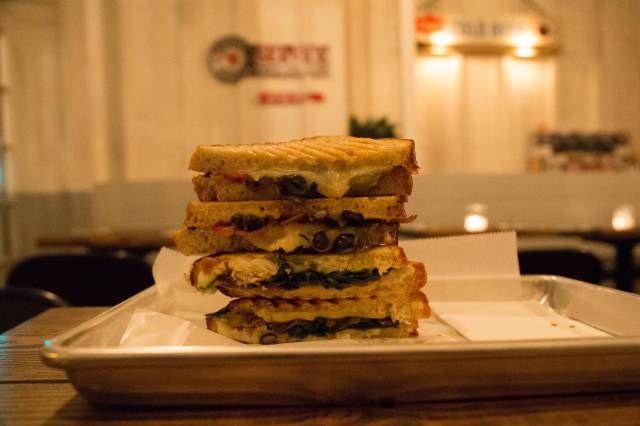 All sandwiches come with a teaser-size portion of Tomato and Kale soup, which provided a nice complement one night—the bright hit of acid is always welcome when you're downing this much salty, earthy breads and cheeses—but was terribly over-seasoned another time. Fontana gave me a free sample of a vinegary potato salad side he's been "fooling around with" in the basement, and it was terrific. We need the place to get busier so he can make big tubs of the stuff to put on the menu.

Fromage Garage also has a number of "Sweet Press" dessert offerings. I can't resist dulce de leche, and the Don Eddy offers a fine delivery vehicle for that delicious milk caramel, complete with a fruit chutney that doesn't neglect the bitter rinds. One other freebie sample: Fontana's bread pudding with a thick coconut cream, which also deserves to make it to the menu someday.

THE VERDICT
Very good "cheesers" (which is what Fontana called them as a kid; it was the first dish he learned to make), and an owner who cares about his food and everyone eating it makes this an easy restaurant to root for. But Fromage Garage needs some early adapters to give the place some life. Beer and wine are coming soon, so maybe that will help, too.

Fromage Garage is located at 441 Metropolitan Avenue between Marcy and Meeker Avenues, just west of the BQE. (929-337-8535; fromagegaragenyc.com)

#Eddy Fontana
#fromage garage
#quick bites
#williamsburg
#original
Do you know the scoop? Comment below or Send us a Tip