Check Out This Sexy Singing Sushi Extravaganza In Midtown

This is Sushi Roxx. What is Sushi Roxx? Sushi Roxx is "a unique, high energy, vibe dining destination restaurant." What does that mean? On Wednesday night, I was invited to find out; here's what I learned. 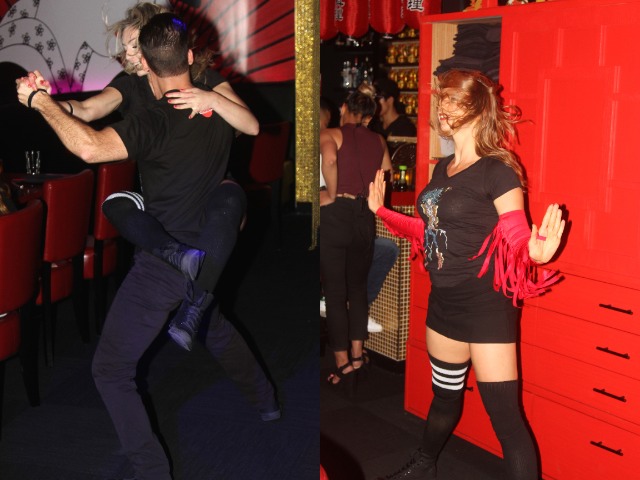 Sushi Roxx operates in a similar fashion to Jekyll and Hyde Club or Ellen's Stardust Diner, whereby actors, singers, dancers and performers abruptly burst into song or elaborate—and harrowing, given proximity to tables, chairs, drunk patrons and disco balls—dance routines. Moments later, they're back to refilling your water glasses and replacing the fork you dropped on the floor.

There's definitely a sexier edge to the performances here, including lots of dropping it low and picking it up slow, flirtatious come-hither arm gestures and the generally nubile quality to the performers. That only two (the hostesses) were clad in overtly sexual garb—unless you're turned on by thigh high knit socks resembling a soccer referee—was both surprising and refreshing. 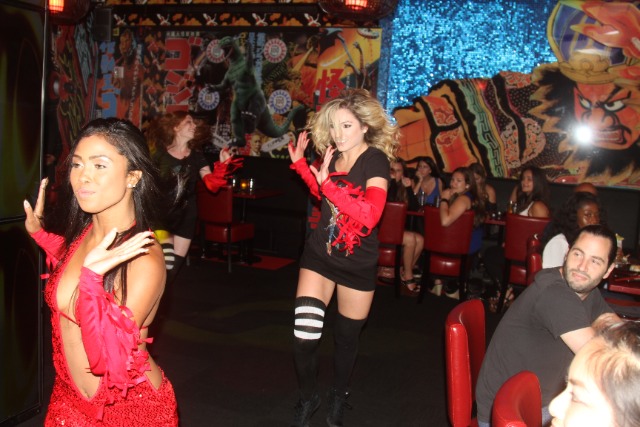 That said, I'd never considered the importance of double-sided fashion tape. Sure celebs on the red carpet might need a piece or two to keep the side boob in check, but once you've seen a young woman perform a nearly five minute, dance-heavy rendition of Beyonce's "Baby Boy" wearing what amounts to some artfully placed sequins and an elaborate netting of string, it really drives the point home. To that end, the staff is a talented bunch, especially the dancing and a version of "Don't Speak" that turned into a mini crowed sing-along. 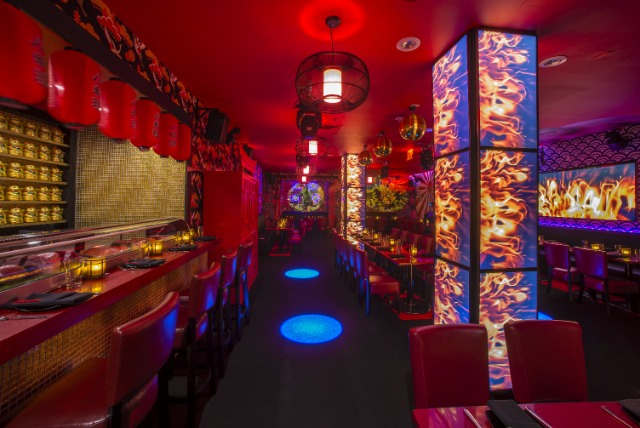 LCD screens make for incredibly versatile pieces of decor. Flames! Bubbles! Abstract geometric images! Honestly, I'd expected the decor to be pretty tacky considering the location and theme, but it was surprisingly fun and engaging. I've never been to Tokyo, but if I go, I hope to see giant Godzilla pinball paintings, blown up Sumo wrestler photos, walls made of beckoning cats and enough disco balls and colored spot lights to bring on a seizure. What I mean to say is that I can't speak to the authenticity of the design, but it's a lot of fun to look at while ogling chiseled dancers and inhaling sushi. 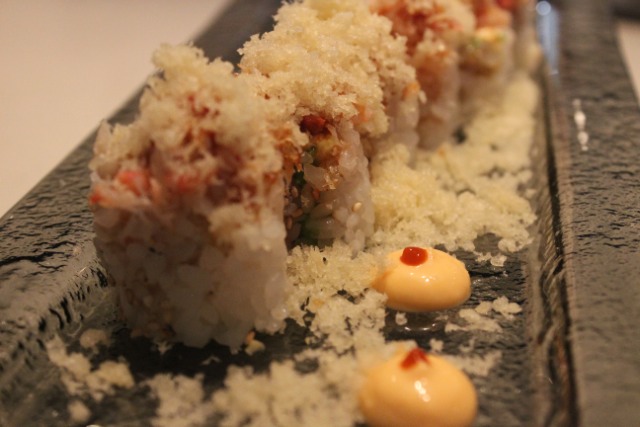 The edict that everything tastes good fried can also be applied to the sushi menu here, where many of the restaurant's speciality raw fish items come decked in "crunch" or contain some kind of tempura-fried option. I don't shy away from a glistening piece (or 5) of uni, but it's hard not to like something with texture that's, well, derived from fried bread. That said, the sushi here is above average for the kinds of places that serve double digit sushi rolls, though the $16 average price point is undeniably steep.

Of the stuff I tried, my favorites were the Spice Girl ($16) made with spicy salmon, pickled jalapeno, crunch and aioli topped with a chiffonade of basil and the Big Mac ($18), a triangular "sandwich" of rice pieces filled with spicy tuna, avocado, snow crab, tobiko and a drizzle of sweet soy sauce. Skip the Godzilla, which didn't deliver much of anything, let alone the sensation of a giant lizard invading your mouth, and the Spicy Tuna Crunch Roxx Box, which was a flavorless heap of rice, "spicy" tuna and more of that tempura crunch. 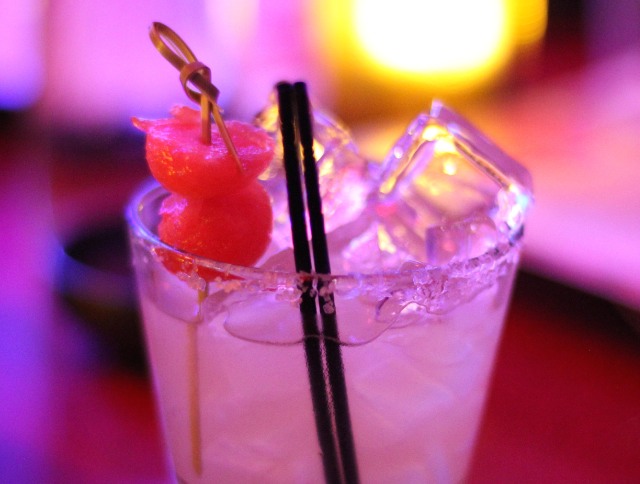 I'm not much for cocktails, preferring to imbibe my spirits neat, but the mixed drink options here (all $15) are more solid than they need to be, considering all the fanfare involved with a meal. The Green Mantis had a nice kick from serrano pepper mixed with tequila, honeydew, agave and lemon and the Cobra Kai contained an appropriately smokey and spicy balance with mezcal and pink peppercorn. Plus, I'm a sucker for any kind of Star Trek reference (see: Kobayashi Maru).

So who will actually go to a place like this? Sitting amongst the Netflix stars and reality "stars" I wondered whether the average New Yorker would deign to find themselves in a place so deliberately over-the-top.

The bathrooms are dope as hell though, so go check it out.