Tuesday begins the Dragon Boat Festival, the annual boat racing festival that will be celebrated with boating and eating across Asia and other places. Take part in festivities in NYC Tuesday night at An Evening With Dragons, a collaborative dinner event between Nom Wah Nolita, The Tang, Ho Foods, Win Son, and GN Chan taking place at The Old Bowery Station in Nolita. Dine on shrimp buns, garlic cucumbers, chicken dumplings and breakfast congee with a century egg, among other dishes. There'll be plenty of Tsingtao beer and a cocktail made with a century egg, too. Tickets $60.

A wallet-friendly happy hour has launched at '70s-themed Ethyls Alcohol and Food on the Upper East Side. Monday through Friday from 5 p.m. to 7 p.m. take advantage of the Fi-Dolla Happy Hour deal, daily specials that include $5 drinks and $5 plates of food. Mondays it's Mexican Meatballs and a Jameson Black Barrel cocktail ("The Gent"), Tuesdays it's fish tacos and a Watermelon Felon cocktail, and Thursdays it's Disco Curds and the Bump & Grind cocktail made with rye and ginger. Check out the full lineup here. 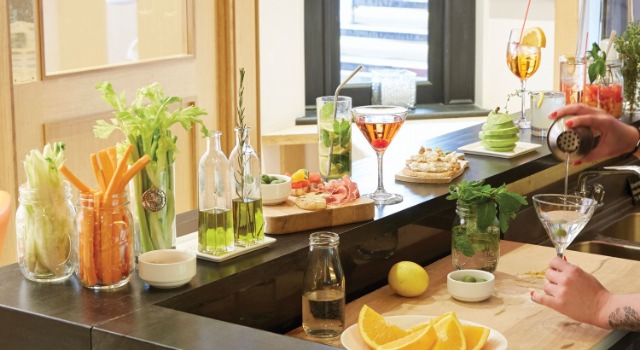 Elsewhere in happy hour news, Altesi Downtown in SoHo is offering a new aperitivo program Monday - Saturday from 5 p.m. - 7 p.m. at the bar. $15 buys you a cocktail like an Aperol Spritz or half a bottle of prosecco, both of which come with a plate of food to nibble on. Bites include cheese, Italian crudité, bruschetta, ricotta with honey or anchovies with butter.

On Thursday and Friday get a sneak peak at a new ice cream offering at both locations of Creamline in Chelsea Market and Chelsea. The shops will be serving free mini cones in chocolate or vanilla Ronnybrook soft serve. After Friday, the cute ice cream cones can be purchased for $1.