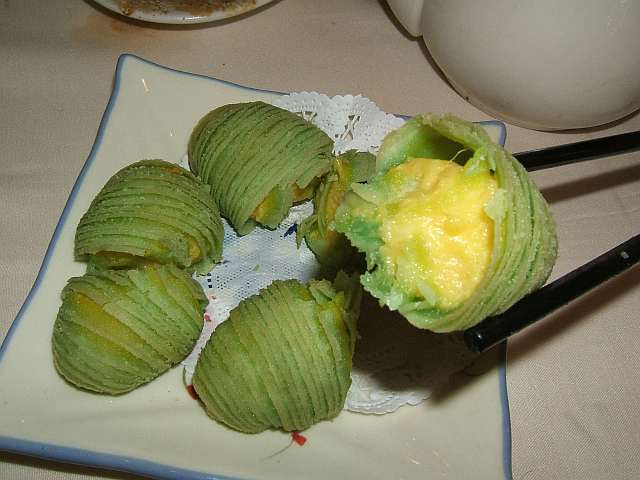 One of the things that makes eating dim sum in New York City exciting is the seeming endless variety of savory and sweet morsels. Even veteran dim sum eaters are rewarded by new discoveries every so often.

An initial visit to Chatham Square Restaurant for lunch last Friday yielded just such a find. One of the dessert carts had flaky green pastries that resembled caterpillars. Oddly colored desserts are fairly common in dim sum restaurants. What made these sweets interesting is that they were made from durian. That’s right, durian, the king of fruits which Anthony Bourdain describes in A Cook’s Tour as smelling "like you'd buried somebody holding a big wheel of Stilton in his arms, then dug him up a few weeks later."

It’s not unusual to find frosty durian shakes in Vietnamese restaurants around town, but pastries made from the spiky Southeast Asian fruit were a first for a table of eaters that including a Hong Kong native and several others with deep dim sum experience. The flaky liulan soo came to the table piping hot filled with a bright yellow pudding. It had a kinder, gentler flavor than fresh durian, which has a funky undertone that can linger for quite some time after one has swallowed the last creamy bit. In fact the green and yellow treats were so tasty that almost as soon as the first plate was finished another was ordered. Nothing against Chinese desserts, but the number of times this happened can be counted on one finger.

If your curiosity about these delectable durian treats has been piqued, you’ll have to hold out a few more days; Chatham Square Restaurant only serves them on weekends.