Challenge Yourself With This Gigantic Chicken Parm Starting This Sunday

The whimsical ice cream carnival that's been unfolding in Nolita courtesy of OddFellows at Chefs Club Counter concludes this Sunday with $1 ice cream creations. Cones like The Cotton Candy Creamsicle (vanilla and tangerine soft serve in a cone wrapped in orange cotton candy) and The Pink Dip (chocolate soft serve dipped in pink chocolate dip with freeze dried raspberry and gold dust) will be just a buck; posing your cone in the Instagram stand will be free.

Mister Dips, the airstream burger joint at the William Vale hotel in Williamsburg, hosts a free block party on Saturday benefitting the Open Space Alliance for North Brooklyn. Mister Dips, Wylie Dufresne's on-site Du's Donuts and Coffee, and south side neighbor Pies'n'Thighs will all be concocting special dishes, while local companies like Brooklyn Bowl and Brooklyn Boulders will be supplying activities including cornhole and slacklining.

Atlantic Antic winds its way down the avenue between Hicks Street to Fourth Avenue in Boerum Hill, Brooklyn Heights, Cobble Hill and Downtown Brooklyn on Sunday. Along the way, stop for refreshments like the Gumbo Bros/Jean-Paul Bourgeois of Blue Smoke collab featuring beignets, a special gumbo and jumbalaya or another quick bite from one of the businesses along the route. There will also be tons of live music and other festivities from noon til the Antic ends at 6 p.m. 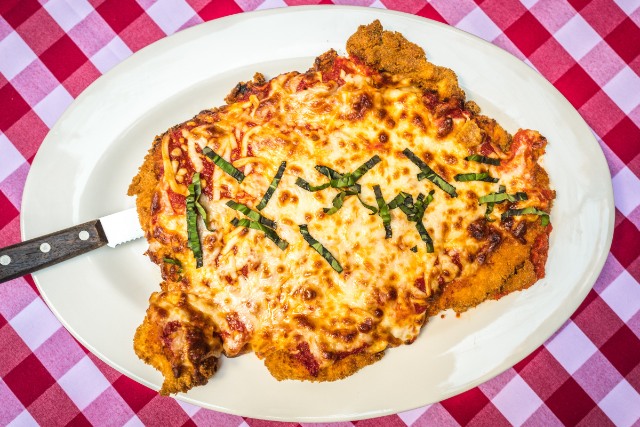 (Mamma Guidara's at The NoMad Bar)

Beginning this Sunday, the "Mamma Guidara's" pop-up returns to The NoMad Bar, bringing a red sauce Italian experience to the chic space, which will be transformed with checkered tablecloths and wine bottle candle holders. Mama G's will serve a multi-course meal for $68 that includes four appetizers (garlic bread, fritto misto, antipasti and ceasar [sic] salad) for the table; a choice of chicken parmesan, braciole or branzino; one of four types of pasta; and cheesecake for dessert. The pop-up proceeds on Sundays for the foreseeable future.

On Sunday, il Buco in NoHo hosts its annual pig roast on the sidewalk of Bond Street. From noon til 6 p.m. they'll be roasting a Flying Pigs Farm's hog on an open fire grill, which they'll be serving straight from the fire or as part of a porchetta panini with sides like panzanella salad. There are several levels of tickets depending on how much pork you want to eat; proceeds benefit Edible Schoolyard NYC.