The 49-year-old chef Cesare Casella is known for his food, sure, but he’s also known for the almost comical rosemary boutonnière he seemingly wears 24-7. He is so enamored of the herb that it sprouts in the window boxes outside his 35-seat restaurant and specialty grocery Salumeria Rosi and overflows from the diamond-shaped sapling planters in the sidewalk below. The tiny restaurant portion of the space specializes in small, rustic Italian plates. Its menu of sliced-to-order meats and cheeses is all very affordable: almost everything, like Casella’s signature salad of soft scrambled egg, pancetta and market greens costs $7 or less. We asked the chef a few questions about the restaurant (which opened last year), the banned Parma ham culatello (“the heart of prosciutto”), and how in his own heart Casella identifies with the buttero, or Italian cowboys of Italy.

Where did you get your start cooking? My parents had a restaurant near Lucca in Tuscany, a small village trattoria called Vipore. So I started by washing dishes, grew up in the business, and attended a very popular cooking school called the Institute Ferdinando Martini. After some time I made Vipore a very popular restaurant and it was awarded a Michelin star. After that, I decided I wanted to do something different so I had to come to NY. I started working here in 1993, but still make time every month to go back to Italy. My parents still own the restaurant.

You were the chef at Coco Pazzo, Beppe, and Maremma before opening this restaurant. How did Salumeria Rosi come to be? The idea for this restaurant started a couple of years ago when I met with Alessandro Rosi of Parmacotto. We were talking about salumi, and I had already decided I wanted to do something different. Instead of just opening another restaurant we thought it would be better to open something like a traditional salumeria. The idea is basically the same as it is in Italy: people from the village need a place to get bread, some salami and cheese, a bite to eat, or a glass of wine. It’s nothing special, really, it’s not a brand new idea. What we did was repurpose the same concept here for NY.

And you’re already involved with importing a specific food line to NY; that’s what you did with the Republic of Beans. That’s something I’m still doing. They’re all heirloom beans from Italy, because I’m from Italy and we make good beans.

Why did you choose this neighborhood for the Salumeria? Because it’s four blocks from my apartment [laughs]. Okay, that’s true, but really it’s just a great location.

Some Parmacotto products aren’t available in the United States because of importing restrictions. Is there anything from Tuscany, or Italy in general, you wish was available here? There are a lot of them. One is a kind of culatello, which is sort of like a hard prosciutto that comes from a large muscle on a pig’s leg. In Italian culatello means “nice ass.” It’s aged in a very special way, made from that particular cut, and it’s really the heart of prosciutto. I’d love to be able to serve it, and there are other kinds of salumi I’d like to bring over eventually.

Can you pick one dish on your menu right now that sort of shows what you do at the restaurant? It’s more than one dish. Our portions are all small plates and are meant to be inexpensive. When I go out I like to have fun, and having fun for me means being able to taste a lot of different foods. In general we do a lot of traditional Italian foods here and part of that is having a lot of seasonal offerings. We did some ramps with a farm egg on toast a couple of weeks ago. Very simple food, but delicious.

So it’s sort of a leisurely restaurant here? You want people to come here, relax, and spend four or five hours ordering lots of different cheeses, meats, and small plates? No, not exactly. [laughs] This place is small, and it’s comfortable. We like to share with more people, so the best timing for a meal is more like one hour and fifteen minutes, or an hour and a half.

Do you plans to expand elsewhere in the city? Yes, but at the same time we’re not in a rush. I worked hard to open this location and I’d like to rest a little before opening another Salumeria Rosi. 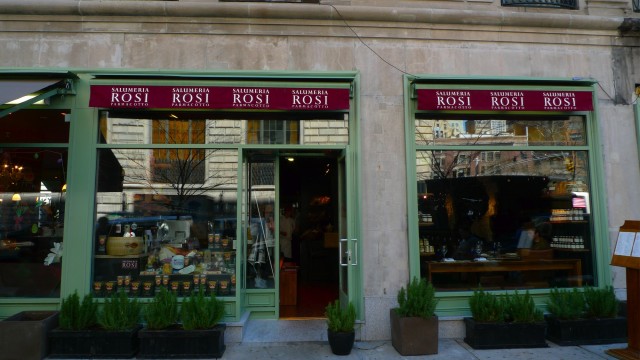 I wanted to ask about the “kid critic” David Fishman, who now apparently has a movie deal. The story is that he started his notebook-scribbling, restaurant reviewing career here. I think he lives somewhere close, and so he’d come in here around the time we opened last year. It’s unusual for a 12-year-old kid to come in and sit down for dinner by himself.

And you developed some kind of relationship with him the more he ate here? Sure. He’s been in a few more times. I think he likes to eat.

I was wondering if you thought that food critics in general—not just adolescent food critics—should know something about cooking and how food is made to inform the reviews they write? It depends on the target audience of the critique. If you’re a paying customer of a restaurant, and you’re writing for other customers, then I don’t think you need a real education about food and cooking. It’s basically the same thing as giving a recommendation to someone on the street just looking for a good place to eat. If I started writing reviews of Chinese restaurants, for example, I wouldn’t know how to talk about the execution of a dish too much because I don’t know a lot about Chinese food. I only know if I like it or not; it’s harder to know what means to cook it well or not cook it well. If you want to talk smart about everything, and if you’re judging, really judging, then you have to be really technical about the execution of the food.

At your last restaurant Maremma, you screened Spaghetti Westerns during dinner. Maremma is the wild west of Italy. I like Texas, I like cowboys, I like horses. The idea was to put this idea together, and it didn’t do so well. We switched it back to regular Tuscan food and then it was much more popular.

Did you ever cook for the composer Ennio Morricone, who scored a lot of those Spaghetti Westerns? Yes, I have cooked for him here in NY. He’s very popular.

Under what circumstances would you leave NY? What? Back in Italy the people think I’m crazy because I left there to come here. And I go there every month and talk about how beautiful it is here. I’ve had offers—good offers—to open in Vegas, but I like the way it feels to be in my New York shoes, so to speak. I especially love New York now that I speak English. 18 years ago it was much worse.

What would be your pick for NY’s most underrated restaurant? I love Tailor, on Broome Street. Sam [Mason] had a slow start with the food, but now it’s very good. He has a great talent. People don’t write about that place so much. 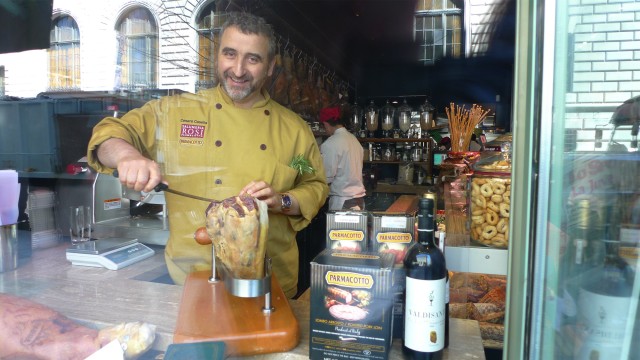 What about a good, after after-hours restaurant? [Casella shrugs]

You’re known for doing things like having hosted karaoke at your old restaurant, for example, at 4:30 in the morning. I’ve done that, but it depends on the company! Karaoke can be fun.

You’re also known for always having rosemary sprigs in your shirt pocket. Is there some kind of story behind that? It’s been 30—no, 35—years. It’s with me all the time. The rosemary was originally just for cooking, so I used to keep it only in my chef’s jacket. Now rosemary goes everywhere I go.

That might be nice on a plane. Do you have rosemary in your pocket when you fly? I do. One time I was coming back to Italy and I arrived at customs, and of course I was wearing rosemary in my pocket. They asked me if I had anything to declare. I said no, nothing. They said, Sir, what do you have to declare? Nothing! I said. Then what is this? They asked. Ahh, I said. This is my good luck charm. So what is it, exactly? They asked. My good luck! I said. My herbs! Okay, they said, that has to go through inspection. I’ll throw it away, I said. No, they said, it has to go through inspection. So that was that. I went through inspection.

That happened at JFK? No, it was Newark.