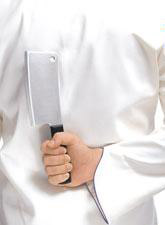 Food world celebrities gathered at the Astor Center last night for a lively discussion on the phenomenon of celebrity chefs. Andrew Carmellini, Gwen Hyman, David Chang, Gail Simmons of Top Chef, and Mitchell Davis of The James Beard Foundation all weighed in on the celebrity craze, which has infiltrated kitchens everywhere like roaches. Only recently, some argued, has the idea of the celebrity chef become a prominent force in American culinary culture. Customers take digital pictures of every entrée, kids trade Iron Chef results like they were baseball statistics, and weirdos in Helsinki post wistful paeans to Tom Colicchio on Top Chef fansites. Some soundbites from last night:

Simmons on the pre-Top Chef world:

“When I told my Mom I was going to be on a reality show, I had to convince her that I wasn’t going to be tied to a tree on an island in a bikini, eating maggots.”

Simmons on the post-Top Chef world: “It’s television first, food second. As much as I want to say it’s about the food, or as much as Tom [Colicchio] wants to say it; it’s a losing battle.”

Carmellini on blogger people: “The four year cycle of reviews is gone. Now, there’s too much salt in my scallop and someone is twittering about it.”

Chang on prevailing food culture: “The whole world is changing, the food world is changing. There might be books on knife skills, but that doesn't mean you have good knife skills. I still want cooks who show up with sharp knives and know how to take care of them. It’s the only spoke on this wheel I can control.”

Chang talked about the beleaguered reservations system at Momofuku Ko as something that was imperfect and beyond his control, but better than the alternative, where all 12 seats would get snatched by VIPs. And Simmons argued that Top Chef could be a force for good in the world, by helping contestants open their own restaurants and helping the audience learn more about food. [More reading: Eater, Grub Street]

#andrew carmellini
#astor center
#celebrity chefs
#david chang
#gail simmons
#Gwen Hyman
#mitchell davis
#tom colicchio
#top chefs
Do you know the scoop? Comment below or Send us a Tip
A new Gothamist is coming! We’ve moved comments over to our beta site. Click here to join the conversation and get a preview of our new website.