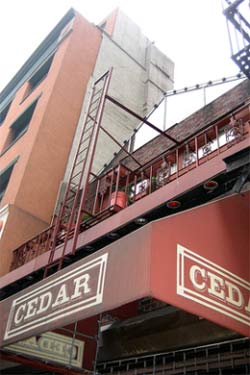 The Cedar Tavern has been closed for over a year now, and someday soon New Yorkers will finally get more of what they so desperately need: more condo units priced at $1.7 million and up! The famous tavern on University Place, long associated with the drunken hi-jinks of notables like Jackson Pollock and Jack Kerouac, shut down in December 2006 for “renovations” and never reopened. Promises to come back as part of the nine-story condo have gone unfulfilled; owner Michael Diliberto told The Real Deal:

“Cedar is past. Cedar is history. It means something to me. It doesn't mean something to the next generation." Diliberto and his late older brother Joe initially envisioned condos on top of the Cedar Tavern, but plans to reopen the pub were abandoned when Joe was diagnosed with fatal cancer and died two months ago. The bar closed shortly afterwards, on the day after Thanksgiving 2006.

Diliberto says running the bar is a “difficult business” and doesn’t want to do it without his brother. So while there will be retail space on the ground floor, it won’t be the Cedar Tavern, which opened at its final location in 1963. (Its previous address at 24 University Place, more popular among the boldfaced names, was opened by Diliberto's father and uncle in the 1950s.)

In the next couple months Diliberto will seek approval from the attorney general's office to give the condo project a test-run on the market. If all goes well, plans will be submitted for approval to the state a few months later. And according to Diliberto, the condo’s name will not reference the Cedar Tavern in any way.

Photograph of the Cedar Tavern before the condo construction by WallyG