Sorry Stefon, but it looks like for once you might be a bit behind the curve. New York's hottest club opened its doors this morning at 10 a.m. to a line that snaked down the block and around the corner. It may not have screaming babies in Mozart wigs, but the Purina One Cat Cafe (around for four days only!) offers something much better: 16 adorable, adoptable kitties. Plus, all visitors are allowed one free cappuccino and one free snack. Friends, this place has everything.

The city's feline fanatics were out in force this morning, anxiously awaiting their chance for some quality cat time. "I'm pretty positive I could meet my husband in here," one woman gushed to her girlfriends. As both a staunch puppy defender and a sufferer of intense cat allergies, I prepared by popping multiple Zyrtec and felt certain that my true allegiance would be discovered. Surely I'd be spattered with hatred-infused hairballs. Not so, although I did depart positively coated in kitty fur, simply a hazardous consequence of the job at hand. Namely, that job was cuddling. 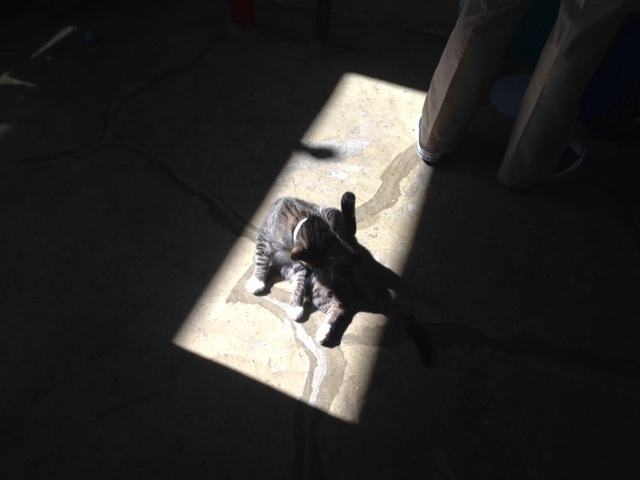 Ashley Matarama, a student from Hudson County NJ, told us she'd "stay as long as they let me. I'm just playing with the cats today, because I live in an apartment and unfortunately I can't get one." One of the first in line, Matarama later dangled a curly toy over a tiny black kitten as jealous queuers peered in through the huge windows. Her mindset seemed to be shared by most in line for Cat Nirvana, including BU student Kristifor Sunderic, who weighed in on the cafe through a more highbrow lens. "I really like going to exhibits like this," he said. "It really makes the city unique."

No one within a square mile could resist tossing in their two cents on the fluffy marketing ploy, and we overheard several gems from passerby. "I like cats," mused a gray-haired gent in aviator shades, "but this is stupid." 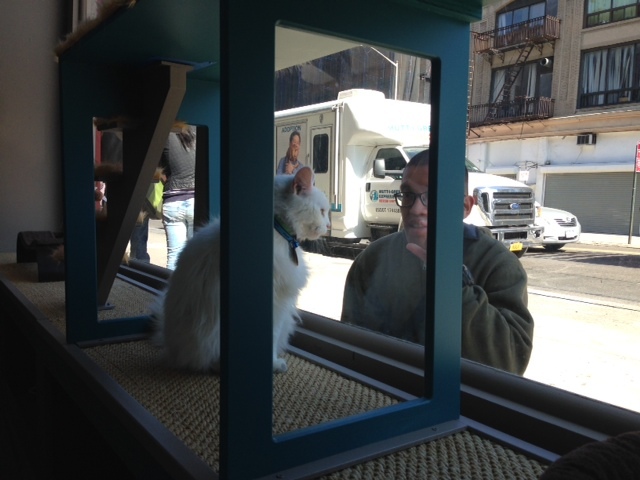 Though most seemed set on commitment-free cuddle time, by 11 a.m. two cats had already been adopted. Be sure to move fast if you're intent on giving one of these sweet furry angels a caring home! Pro Tip: keep an eye out for Connor the gray tabby. He'll be the one batting around a mouse toy and playing your heartstrings like a goddamn Stradivarius.

#adoption
#allergies
#cappuccino
#cat cafe
#cats
#fluffiness
#free food
#puppies
#original
Do you know the scoop? Comment below or Send us a Tip